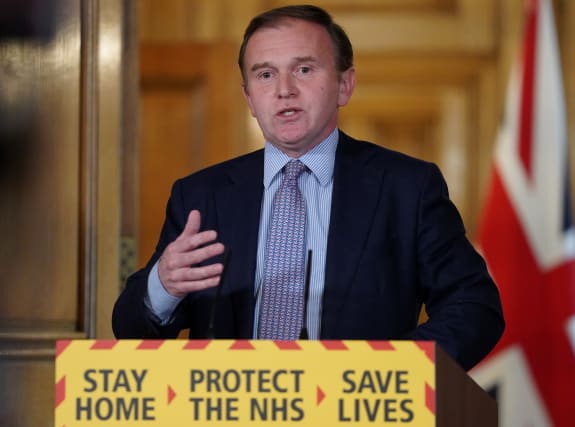 Ministers have looked to downplay differences emerging between UK nations on lockdown measures and warned there would be no “dramatic overnight change” to the restrictions in England.

Environment Secretary George Eustice, speaking at the daily Downing Street press conference, said the UK was still “not out of the woods” when it came to the coronavirus threat.

He became the latest minister to temper expectations regarding the alterations the Prime Minister is likely to make to social distancing rules when he addresses the nation on Sunday.

“We have to be realistic that there isn’t going to be any dramatic overnight change, we will be very, very cautious as we loosen the restrictions we have, as the data that we’re outlining on a daily basis shows we are not out of the woods,” said Mr Eustice.

“There are still major challenges, we will be living with this virus for some time to come and it’s therefore important to avoid that second peak that could overwhelm our NHS.”

His comments came after the devolved administration in Wales announced “modest adjustments” to the restrictions on movement, put in place across the UK to stem the transmission of coronavirus.

First Minister Mark Drakeford said the three changes, coming into force on Monday, included allowing more than one form of exercise per day and permitting garden centres and public libraries to reopen.

But in Scotland, only alterations to exercise guidance are expected, while those in Northern Ireland have been told there will be just “nuanced changes” to the clampdown on movement.

The announcements came around 48 hours before Boris Johnson is due to declare the result of the UK Government’s review into what rule changes should be brought in for England.

The PM has promised to exercise “maximum caution” when tinkering with the restrictions but paved the way this week for the devolved nations to move at “different speeds” when releasing the lockdown as long as “there is evidence that supports” the decision.

Mr Eustice, in a bid to combat fears that UK leaders were fracturing in their approach to dealing with Covid-19, said the public should not get “worked up” that the four nations were choosing to announce changes at different intervals.

The Cabinet minister said: “Generally speaking we’ve taken similar approaches, even though there have been slight differences.

“I don’t think we need to get too worked up about timings of different announcements, Scotland made some comments last week, Wales has today.

“The Prime Minister will be setting out his approach and that road map and how we intend to evolve these restrictions on Sunday.”

He also reiterated calls for people to stay at home, despite the VE Day bank holiday, marking the 75th anniversary of the cessation of hostilities in Europe during the Second World War, proving to be one of the hottest days of the year.

– The NHS Covid-19 symptoms app was given the vote of confidence after NHS England medical director Professor Stephen Powis said many older people were adopting smartphones and could be encouraged to download the app.

– McDonald’s drive-thru restaurants, which are starting to reopen, were branded as being “made for the social distancing situation we are in” by Mr Eustice.

– Talks are ongoing between ministers, rail bosses and unions about increasing train services, as preparations for easing the lockdown continue.

– NHS England on Friday said a six-week-old baby with underlying health problems had died after testing positive for the virus, believed to be the youngest known victim in the UK.

The PM is set to unveil his “road map” for easing the lockdown in a broadcast to the nation on Sunday after he has convened his Covid-19 war cabinet.

The use of masks, PA understands, is expected to be referenced in the new guidance for England, which will be published in full on Monday.

Culture Secretary Oliver Dowden looked to dampen public expectations for the announcement during his morning broadcast round, stating that “limited moves” will be made to ease the restrictions.

Official data suggests more than 36,000 people have died with coronavirus in the UK since the pandemic broke.