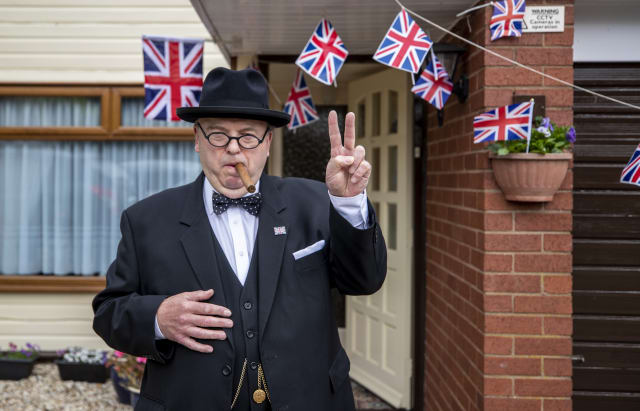 A Winston Churchill impersonator did not despair when a three-day VE Day outdoor celebration was cancelled because of Covid-19.

Derek Herbert was due to give a Churchillian speech at Hever Castle in Kent, the childhood home of Anne Boleyn, which was to turn red, white and blue throughout the Bank Holiday weekend to mark 75 years since the end of the Second World War.

But despite being in lockdown at his home in Little Neston, Cheshire, with wife, Linda, who portrays Clementine Churchill, he will be dressed as the wartime prime minister throughout Friday for a series of online performances.

Among the events will be the VE Day 1940s Performers Extravaganza, a free concert hosted on Facebook by vintage singer Miss Madeline Brown.

Actor Mr Herbert has played Mr Churchill for about 15 years with his screen credits including BBC dramas Close To The Enemy and Summer Of Rockets.

He also features in the movie Lawrence: After Arabia, starring Brian Cox and Hugh Fraser, due to be released later this year.

Mr Herbert, who has his own website at www.churchill-lookalike.co.uk, is proud not to refer to notes when he re-enacts Mr Churchill’s famous speeches and says he captures his intonation, pauses and lisp.

He said: “I find it a great honour to portray Winston Churchill.

“Without him he we wouldn’t be here.

“Winston Churchill saved the nation and ultimately the world.

“He was a man of many talents and a great orator.”

On May 8 1945 Mr Churchill took to the airwaves to officially announce the end of war in Europe.