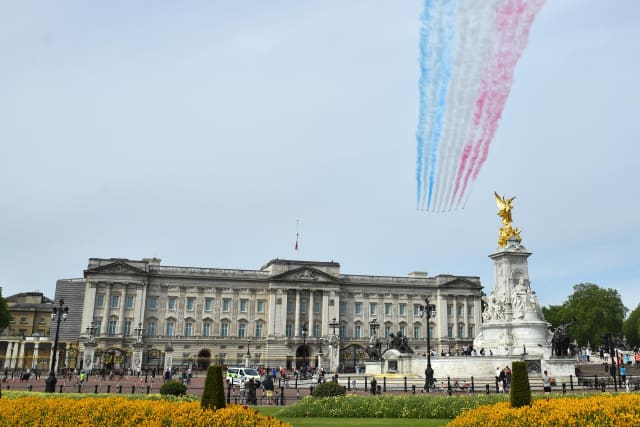 Cheering onlookers have been treated to stunning flypasts as the UK basked in bank holiday sunshine and celebrated the 75th anniversary of VE Day.

Veterans looking up eagerly have watched fighter planes soaring overhead and members of the public ventured outside to mark the historic occasion.

Despite swathes of events having to be cancelled because of the coronavirus lockdown, the UK has found ways to come together to pay tribute to those who served in the Second World War.

The day began with a poignant two-minute silence led by the Prince of Wales at Balmoral and has gone on to feature touching stories from the war as well as special performances.

In Worthing, West Sussex, Second World War veteran Len Gibbon, 96, shielded his eyes as he looked up to watch a lone Spitfire soar over the Care for Veterans care home.

Others across the South East cheered as the wartime fighter plane looped over Queen Victoria Hospital in East Grinstead and Dame Vera Lynn’s home in Ditchling, East Sussex.

Over London, the famous Red Arrows trailed red, white and blue over Buckingham Palace and the London Eye.

In a UK first, messages such as We Will Meet Again and Thank You were etched in the sky above Henstridge airfield in Somerset.

The stunning display was commissioned by the Department for Transport, which recently introduced a law change to allow skytyping and skywriting to take place.

In an interview broadcast on the Royal British Legion’s (RBL) livestream, wartime evacuee Dorothy Pettican Runnicles bonded with the Princess Royal over the difficulties of technology.

Ms Pettican Runnicles said she volunteered for service aged just 17-and-a-half because “it was the thing to do”.

She told Anne about her time with the Fleet Air Arm in the West Country, saying: “It challenged me, it stretched me, I learnt about death.”

The Princess Royal then asked her about the current pandemic, saying: “And have you found yourself very restricted recently?”

Anne laughed and said: “I live in hope that I’m going to get better.”

Dame Joan Collins described on the livestream programme how her London home was destroyed in an air raid when she was a child, and tenor Alfie Boe entertained those watching by singing.

Dame Joan said: “We got bombed out and I remember going to our home in Maida Vale and seeing that the whole flat was gone.

VE Day will also be marked with a national singalong to Dame Vera’s We’ll Meet Again, broadcast on BBC One.

In a special message broadcast on the RBL livestream on Friday morning, Dame Vera gave her thanks to the wartime generation.

The message, read by actress Lesley Sharp, said: “As we commemorate the 75th anniversary of the end of the war, what a perfect opportunity for me to say thank you to everyone who did their bit to help us fight for freedom.”