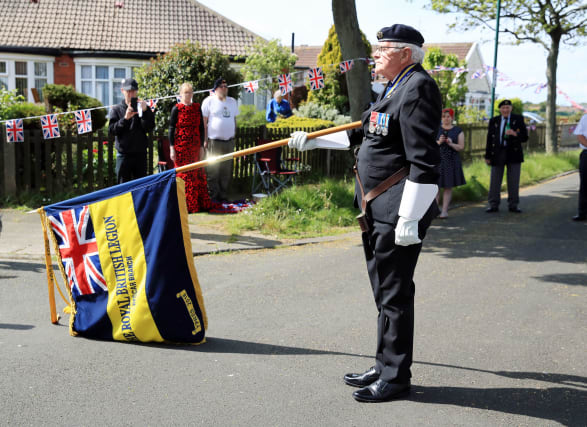 A Royal British Legion chairman and his neighbours celebrated VE Day despite the coronavirus outbreak and vowed to make the best of a “sad situation” with a socially distanced street party.

Former soldier Eric Howden BEM, 75, had planned a parade with comrades in Redcar, Cleveland, but restrictions meant the event was cancelled.

So he organised a mark or remembrance outside his bungalow, lowering his branch’s Royal British Legion standard at 11am and observing a minute’s silence.

Neighbours came out into the street while others stayed in their gardens, with Sheila Gaffney, 68, using a ladder to see over her privet hedge.

During the minute’s silence, the only sounds were the blackbirds singing sweetly in her garden and the rustle of the bunting her grandson Eli, six, had coloured in.

Dressed in his black suit, beret and white gloves, Mr Howden led the remembrance ceremony, which finished to the applause of the locals.

As We’ll Meet Again played over the loudspeakers from Mr Howden’s garden, neighbours danced along and joined in.

Afterwards, he said: “The only alternative to what we had planned was to do it outside my own home and the neighbours have come forward too, some sitting in their gardens, some hanging over their fence.

“We have done our duty by paying respects and now we are going to have a street party, doing what we can under the circumstances.

“We are going to have a good time, with cakes, biscuits and buns that people have made, while observing the two-metre rule.

“We will enjoy it and make the best of a sad situation.”

His neighbours have been baking, including a homity pie from a 1940s Land Girls recipe made by Mrs Gaffney.

She said: “Eric works really hard every year and he sent leaflets around suggesting we do this.

“It’s a lovely idea and this is a nice avenue, we still have community spirit here.

“We come out on Thursdays to clap.

“My grandson was worried about us doing this, he said the street is full of old people.

“His mummy reassured him that everyone would be staying in their gardens.”

Mr Howden was in the British Army for nine years from 1961, serving in Germany and Singapore.