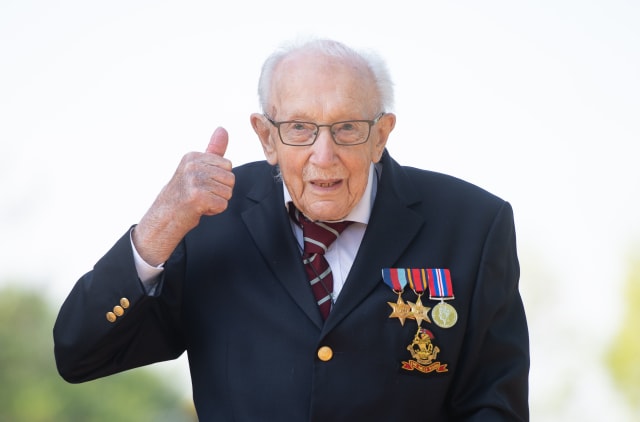 Downing Street has said JustGiving will want to “reflect” on the fees taken for processing the £32 million fundraiser for NHS charities by Captain Tom Moore.

Captain Tom set out to walk 100 laps of his garden in Marston Moretaine, Bedfordshire, before his 100th birthday with an initial fundraising target of £1,000.

He raised more than £32 million, with the JustGiving page closing on his birthday on April 30.

According to The Sun, the website took a £308,000 fee for hosting the fundraising efforts for NHS Charities Together of Captain Tom, who has since been made an honorary colonel.

On Friday, the Prime Minister’s spokesman said: “Thanks to the heroic efforts of Colonel Tom Moore, an incredible amount of money has been raised for hardworking NHS staff.

“The public, businesses and organisations have made extraordinary gestures towards our fantastic NHS and the voluntary sector.

“I’m sure that JustGiving will want to do the same where they possibly can.

“I understand that JustGiving’s owners have made a £100,000 donation to Captain Tom already and I’m sure they will be reflecting on The Sun’s story today.”

The calls to donate the fees come on the 75th anniversary of VE Day.

On a page on its website dedicated to explaining its fees in relation to Captain Tom’s fundraiser, JustGiving said 97% of the money donated through the platform goes to the charity.

The platform said a 1.9% plus 20p card processing fee is applied to cover the card and money transfer charges set by banks and card companies, which JustGiving is unable to waive.

The other 1% of the donation goes to support JustGiving’s operating costs, which it said includes 150 staff.

Donors have the option to make a voluntary contribution to the site to help support its costs.

The Sun reported the £308,000 fee had come from a 5% levy which had been placed on the Gift Aid donations of the fundraiser.

JustGiving previously said the 5% fee is charged to cover the costs of claiming Gift Aid, but charities are able to opt out and claim it themselves.

Its website reads: “Because of our size and expertise, we’re able to offer a much cheaper and quicker way for charities to claim Gift Aid, than if they had to employ accountants or extra staff to do it for them.

“We charge five percent of the Gift Aid total to cover the costs of claiming it.

“This does not come out of the money you donate to any chosen cause and is supported by the charities that choose to use this service.”