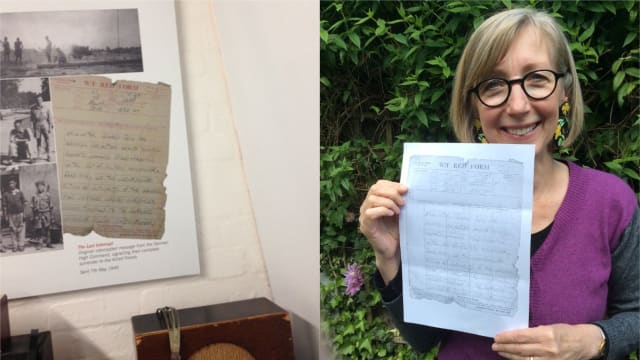 The daughter of a radio intercept operator has described the moment she stumbled upon her father’s note recording Germany’s Second World War surrender at Bletchley Park.

Dr Jennifer Iles, 66, from Wimbledon, was visiting the former home of the Second World War code breakers in 2018 when she approached the final museum exhibits.

One happened to be a note taken by a radio interceptor of the German surrender to the Allied forces – and Dr Iles recognised the handwriting as that of George Curd, her father.

“My parents, who were both radio intercept operators and met at Beaumanor Hall, often used to talk about the war,” Dr Iles told the PA news agency.

“But my father only mentioned he had taken down the surrender on one occasion in the late 1960s. They were still bound by the Official Secrets Act and my mother brought the conversation to a swift end.

“My father was at Bletchley before going to Beaumont Manor so I wanted to take a look around. I was almost at the end of the museum exhibits, feeling very tired and I almost missed taking a look at the exhibits in this particular alcove.

“I was taken aback when I saw the message.”

The message brought the war to an end and was followed by Victory in Europe Day, with Friday May 8 2020 marking the 75th anniversary of the momentous occasion.

Dr Iles hunted for a photocopy she had of the note and afterwards was able to match it with the photo she had taken at the museum.

“I knew my mother had been in touch with Bletchley when my father died, but I never thought any more about it,” she said.

“I’m sure my parents would be amazed that it is now being displayed.”