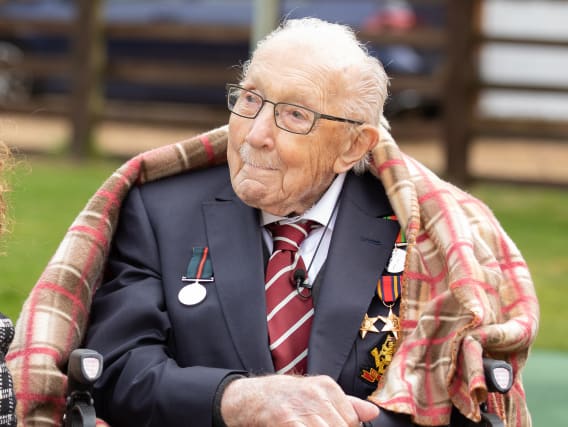 Victory in Europe Day is a “very special” occasion, Captain Tom Moore has said, as he remembered his comrades from the Second World War.

The 100-year-old veteran and NHS fundraising champion said “we all need to be very happy” during celebrations as the UK marks “the end of a very fearsome war in Europe”.

The Yorkshireman, who was just 20 when he was conscripted, has become a national hero by walking 100 laps of his garden before his 100th birthday, raising more than £32 million for the NHS.

After he joined the Duke of Wellington’s Regiment in 1940, he was posted to India the next year, later moving to the jungles of Burma.

He had just returned from Asia and was at an army camp in Bovington, Dorset, when news of Nazi Germany’s surrender came through.

He told ITV’s Good Morning Britain: “It’s a very special day that is celebrating the end of a very fearsome war in Europe.

“But today it really is a very fine day, the sun is shining on us too, so I think we all need to be very happy that the war in Europe did come to an end.

“It was a very important day and everyone concerned was absolutely very pleased that this was the end … the bombing of London, the bombing of other cities … had come to an end.

But despite the war ending in Europe, Captain Tom has bittersweet memories of VE Day, having returned to the UK to work as a tank instructor while his friends were still fighting in Asia.

It was another three months until Japan’s surrender on August 15 1945.

He went on: “At the time I was very concerned that all my comrades I had left in Burma were still fighting.

“My thoughts were with them because although there were great celebrations here all my comrades were still fighting in Burma with the Japanese.”

Captain Tom previously said he would be celebrating by having a “very peaceful, quiet day, rejoicing the very fact that this did happen so long ago and with so much benefit to everybody”.

The veteran, who was made an honorary colonel to mark his centenary and fundraising efforts, added that it is “rather sad” that people will not be able to celebrate the occasion in groups together because of the coronavirus lockdown.

His daughter Hannah added: “We are incredibly proud of him, it has been a whirlwind, we still pinch ourselves.

“We try to do the very best we can to return the huge generosity and love back to the British public and beyond.

“Today we will just continue to do what we’ve been doing, which is respect social distancing and have quiet celebrations here thinking of all those people who died to let us all be free.”