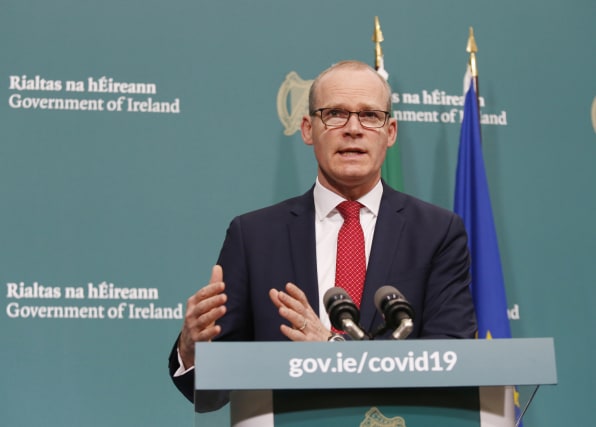 Deputy Irish Premier Simon Coveney has said the Covid-19 pandemic has made the timeline for a UK-EU trade deal “virtually impossible”.

The UK Government has insisted the transition period will not be extended beyond 2020, despite officials in London and Brussels admitting there has been little progress in the two rounds of formal talks held so far.

December 31 is the deadline for the end of the transition period unless the UK agrees by June to extend it.

Mr Coveney said the Covid-19 pandemic means the UK should seek an extension and progress so far this year has been much slower than the EU had hoped for.

“Covid-19 has made what is already a very, very difficult timeline to get agreement virtually impossible,” the Tanaiste said.

“Given the added complications of Covid-19 it surely makes sense to seek a bit more time to navigate our way through these very difficult waters in the months ahead so that we can get a good outcome for the UK and EU.”

Asked if the UK Government could be persuaded to extend the timeline, he said: “I think anybody looking at this from the outside could only conclude it makes sense to look for more time but the British Government has decided that’s not what they want and they have made that very clear both publicly and privately.

“I wouldn’t be raising expectations around the British Government agreeing to seeking more time.

“If we’re going to have any chance of persuading them to take more time then we need to be careful about how we do that because demanding it from them … almost as a concession to the EU, is certainly not the way to do it.”

Mr Coveney was speaking at a video-conferencing seminar on the EU hosted by the International Institute of European Affairs (IIEA) on Friday.

He said the UK wants to “break free from the EU” and forge its own future.

“Talking about the UK being fully autonomous, protecting sovereignty … I get that language, that is what has driven Brexit in many ways,” he said.

“Breaking free from the European Union, not being a rule taker, that’s fine from a political narrative perspective.

“But you can’t have quota-free, tariff-free trade unless there is a level playing field.

“The EU can just never facilitate that and why would they … This is essentially the crux of the issue and if we can’t resolve it, there isn’t going to be a deal.”

He warned the Covid-19 pandemic means the “the path ahead is not clear” for the future of the bloc.

“This is a profound shock that has a direct impact on the life of every European,” he said.

“Even after the virus is defeated, its aftershocks and the new constraints it imposes will define what member states and the union do for the next decade.”

In terms of Brexit, he said June will be a “key moment” in the negotiations.

“Two further negotiating rounds will take place in the coming weeks,” he said.

“Michel Barnier has been very clear that we need to see much better engagement from the UK in these rounds.”

“At a high level Conference, the EU and UK will jointly consider the progress made at that point and what this means for the period after. The end of June is also the last point at which the Joint Committee can decide to extend the transition period.

“This would have to be a decision made by the EU and UK jointly.”