‘Nuanced’ changes to lockdown, but nothing more, Foster warns 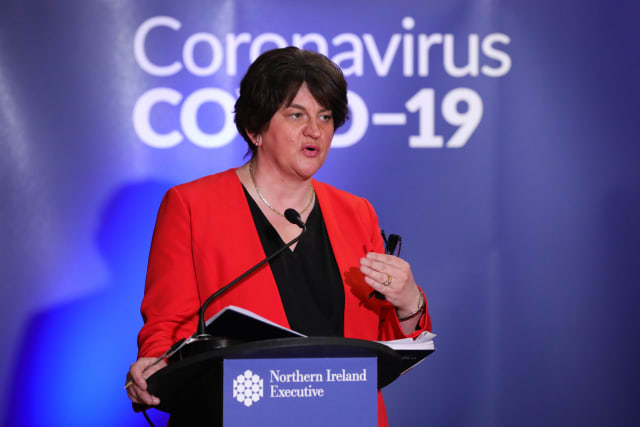 There may be “nuanced” changes to Northern Ireland’s lockdown measures, First Minister Arlene Foster said, after extending current restrictions for another three weeks.

Mrs Foster said it was important to “move together as a bloc” with the rest of the UK to send a clear and simple message to the population.

It comes as UK Prime Minister Boris Johnson prepares to address the nation on Sunday, outlining how lockdown measures, introduced on March 23, will be eased.

Mrs Foster said restrictions in Northern Ireland, extended on Thursday,  would remain in place for the foreseeable future.

But she said it was important to offer some “hope” to the public.

She told BBC Breakfast: “There’s a difference between sticking with the restrictions and making nuanced changes.

“During those three weeks we can look to see if there are some nuanced changes we can make and I would put going out more for exercise in the open air as a nuanced change rather than a fundamental change.

“I think those things can be looked at… but what is important is the regulations are put in place for another three weeks.”

Mrs Foster said she spoke to Mr Johnson on Thursday, and he said he was “moving forward with maximum caution”.

“He, and I as well, want us to move forward if we can in a four-nations way,” she said.

The total number of coronavirus deaths in Northern Ireland is now 422.