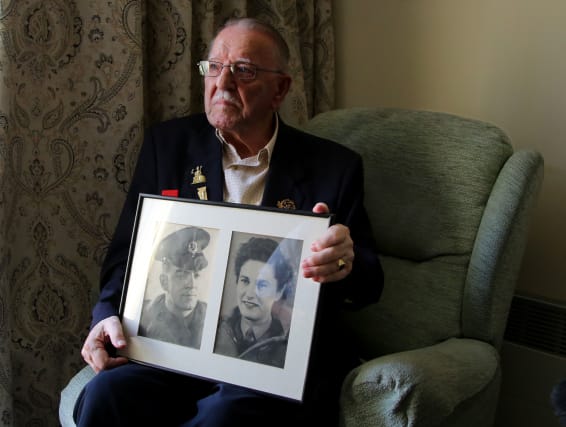 Second World War veterans have described their “great relief” as victory arrived in Europe 75 years ago, with celebrations including people dancing in the street and climbing up lamp posts.

At 3pm that day, Prime Minister Winston Churchill announced on the radio that war in Europe had come to an end, following Germany’s surrender the day before.

Dougie Shelley, 94, who joined the Royal Navy aged 17, served as a Seaman Gunner on the Arctic convoys before being posted to the Pacific and Australia.

He was in a ship in Hong Kong when news came through of Germany’s surrender, and said it “couldn’t have been better”.

“The war killed so many people it’s unbelievable. All around, the Americans, Russians, all the Allies, the same with the Germans,” Mr Shelley, from Southend, said.

“But you were doing a job, the same as they had to. It’s either kill or be killed.

“When we heard about victory in Europe, everybody got together and we all had a good old drink up and jolly up, and couldn’t welcome it much better.

“I don’t remember any of the conversations I had with people. I don’t think I was alive. I think I was half dead. We all were.”

Mr Shelley described how the order of “splice the mainbrace” – for a double tot of rum – was made for the only time during his service.

He had followed his brother and uncle into Royal Navy, then spent seven months on HMS Meon in the Arctic convoys.

“Every day I wake up I think I’m a lucky man to be here, especially when you think of the thousands who didn’t make it,” Mr Shelley, who has been supported by SSAFA, the Armed Forces charity, said.

He was finally able to go home from his ship, the Armada, when VJ Day came on August 15.

Mr Shelley worked as a driver for the Ministry of Defence and then joined the Merchant Navy, before leaving to run security at a port.

Charles Boyer, 94, witnessed the German surrender at Luneburg Heath in May 1945 and received the Legion d’honneur for his war efforts, France’s highest award.

Mr Boyer, who grew up in Spalding, Lincolnshire, lied about his age to sign up as a 16-year-old for the Royal Norfolk Regiment in 1942.

During his military service he landed at Sword beach on D-Day, saw the “dreadful” Belsen concentration camp and assisted with security at the Nuremberg trials.

Recalling the moment peace was declared, he said: “Everybody threw their hats in the air and we had a drink.

“Then we thought, we’re going home, we don’t know when, but it’s over, hooray.”

He received a letter from his father simply saying “well done, you did your bit, and let’s hope we see you soon”.

“It was a great relief, huge sigh of relief all round, including the Germans,” he added.

He added: “I think we did an excellent job all round and we were really grateful it came to an end, and let’s hope we will have peace again forever.”

Albert Selby, 95, from Birmingham, was just 18 when he was called up in 1942, and served with the 1st Battalion Suffolk Regiment of the Army.

He landed on the Normandy beaches at 7am on June 6 1944, and then continued to fight inland to Holland, where he was injured in a blast five months later.

Mr Selby was sent back to the UK to recover from injuries to his body, face and ear, and was discharged from service in 1945.

On VE Day, he saw jubilant celebrations and people climbing lamp posts on the streets of Balsall Heath.

“All the training as a young man in my teens and twenties with the 1st Battalion Suffolk Regiment holds great memories for me,” he said.

“Every day I think about my old pals and those events on D-Day as we fought through France and beyond.”

Mr Selby, a great-grandfather of eight, has recently been provided with new windows and doors from the Royal British Legion, which he said “meant so much”.