VE Day: Navy warships around the world to pierce darkness with light and sound 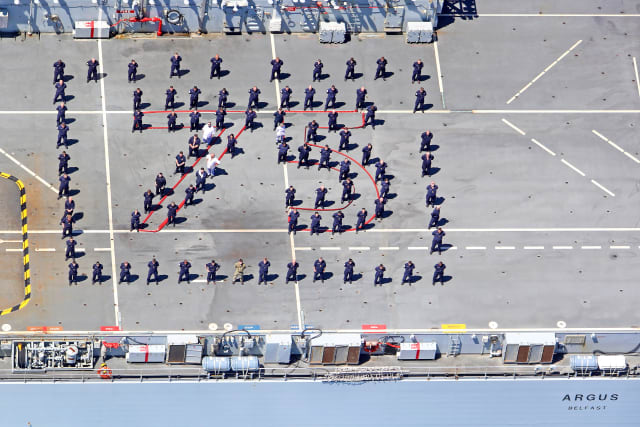 Royal Navy warships around the world will sound their sirens and pierce the darkness with searchlights on Friday to mark VE Day.

From Bahrain to the Caribbean to the Falklands, to the White Cliffs of Dover, the men and women of the Naval Service will join their countrymen in remembering the sacrifices made between 1939 and 1945.

The Royal Navy lost more than 250 warships defeating Nazi Germany and fascist Italy, and more than 40,000 sailors and Royal Marines were killed in the Atlantic, Arctic and Mediterranean.

While the pandemic has forced large numbers of commemorations to be cancelled, the Royal Navy refuses to let the occasion go unmarked.

Among those pausing to reflect will be Warrant Officer 2nd Class Jules Cook, Bandmaster of The Band of Her Majesty’s Royal Marines CTCRM, based at Lympstone in Devon.

“My granddad Eric Cook sadly passed away last year at the age of 99,” he said.

“He served in Africa as a gunlayer in the Royal Artillery and if I could speak to him now I’d say to him, ‘I’m still really proud of you, granddad. Miss you loads and I cannot wait to tell you some more stories one day’.”

Sailors, soldiers and Royal Marines aboard support ship RFA Argus, patrolling the Caribbean to provide assistance in the event of a hurricane, have already paid their respects by spelling out 75 on the flight deck.

On Friday, river-class patrol ship HMS Severn will patrol the White Cliffs of Dover to coincide with a Spitfire flypast and a lone piper on the clifftop.

At 3pm, Royal Navy warships and support vessels of the Royal Fleet Auxiliary at home and deployed around the world will blast their sirens for a minute to celebrate victory – the time marks the moment on Tuesday May 8 1945 when then prime minister Sir Winston Churchill addressed the nation.

The Band of Her Majesty’s Royal Marines have produced special versions of We’ll Meet Again and A Nightingale Sang in Berkeley Square, while the Corps of Drums will perform a special event on Horse Guards Parade, all while operating under Government rules.

At 9.30pm, searchlights on naval ships – both those in harbour and those at sea – will be directed skywards for five minutes. The war’s end marked the lifting of the blackout after nearly six years.

It will be too light for HMS Kent’s searchlights, as she is exercising with the Americans in the Barents Sea, off the North Cape.

Instead, the frigate is flying a battle ensign, a particularly large White Ensign traditionally used to identify a ship’s nationality amid the smoke and fire of battle.

The ship will also hold a service of thanksgiving for those who gave their lives on the brutal Arctic convoys between 1941 and 1945.