UK not showing it has a plan to succeed in Brexit talks, says key EU official 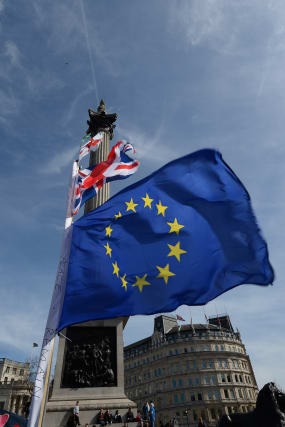 Britain is showing “no real sign” of approaching the Brexit trade talks “with a plan to succeed”, according to the EU’s trade commissioner.

Phil Hogan claimed Westminster has decided Covid-19 is “going to be blamed for all the fallout” from Brexit, as he bemoaned the “very slow progress” in the current negotiations.

He also warned change is required otherwise a combination of the coronavirus and Brexit will result in an “almighty blow to the UK economy later this year”, which will “spill over” to other countries – including Ireland.

Brussels and the UK are currently negotiating a fresh trade agreement via video-telephone conferencing, due to restrictions on movement imposed on both sides of the Channel to stem the spread of Covid-19.

But the UK Government has insisted the transition period will not be extended beyond 2020, despite officials in London and Brussels admitting there has been little progress in the two rounds of formal talks held so far.

Mr Hogan, speaking to RTE, said: “Despite the urgency and enormity of the negotiating challenge, I am afraid we are only making very slow progress in the Brexit negotiations.

“There is no real sign that our British friends are approaching the negotiations with a plan to succeed.

Mr Hogan said the UK needs to outline further details about what it wants to achieve, and the EU is “serious” about a deal.

He went on: “I think that the United Kingdom politicians and Government have certainly decided that Covid is going to be blamed for all the fallout from Brexit… and my perception of it is they don’t want to drag the negotiations out into 2021 because they can effectively blame Covid for everything.”

Cabinet Office minister Michael Gove earlier this week said it is “plain prudence” to stick with the current timetable despite the coronavirus pandemic.

He told MPs a “full and constructive” round of talks with the EU took place last month, with the next scheduled negotiations in the week beginning May 11.

He also claimed extending the post-Brexit negotiations and remaining under European Union rules could hinder the UK’s efforts to deal with coronavirus.