Street parties and bonfires: How the public celebrated VE Day in 1945 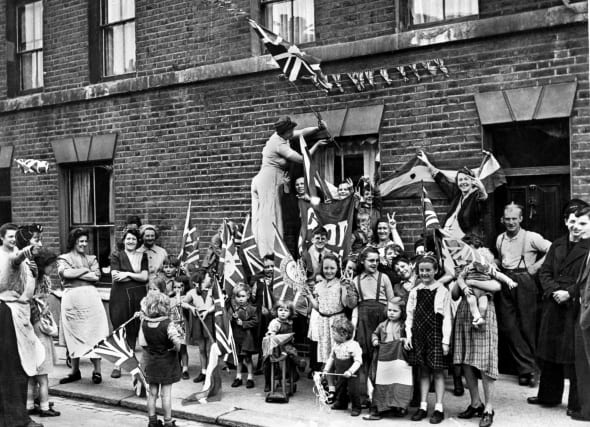 The anniversary of VE Day brings back memories of parties, bonfires and the ringing of church bells for those who were celebrating at home 75 years ago.

Gillian Holding, 83, from Sheffield, was eight years old when victory in Europe was announced in 1945.

Despite being very young, she remembers growing up to the sound of planes flying overhead and bombs falling and carrying gas masks to and from school.

In 1945, Britons at home knew that the Germans were nearing defeat with the final surrender acting as the “climax” of expectations, Ms Holding said.

“Union Jack flags were put out of bedroom windows and there was a lot of consternation, I remember that some people didn’t get their flag right on the pole,” she said.

“I could hear them that night when I was in bed, singing and dancing down the main road where we lived. Very happy people.

“My father, as soon as he knew the war had ended, went on the train to London to celebrate.

“When I saw pictures of the crowds outside Buckingham Palace and the joy there, I could understand perhaps why he wanted to go.”

A party was organised on the green opposite her grandfather’s house, with a spread of sandwiches, tinned peaches and cakes laid on.

Ms Holding added: “What I do remember – this is me being dead miserable at eight – somebody had provided some jelly and they gave it to the very little ones, and I thought if only I could have had some jelly.”

For a young girl, understanding what the end of the war meant was difficult.

Ms Holding said: “I can remember asking my parents what on earth would be on the news now that there wasn’t war.

“Children today might be thinking what on earth will be on the news when the coronavirus is gone, because war was all that was on the news.”

Just over a year after the war, she remembers receiving a special letter from King George VI sent to thank all children for enduring the war.

George Bradford, 89, was evacuated from London to his grandparents’ home in Lincoln during the war and was 14 years old when VE Day arrived.

He remembers silence falling while people listened to Winston Churchill announce the end of the war on the radio.

“It wasn’t very long before we heard church bells.

“All the churches all the way down Lincoln high street, going all the way up to the cathedral, all you could hear was peals of bells.”

He later joined the Royal Marines in 1948 and went on to serve for 27 years.

Alec Borrie, 95, from London, was in a transit camp in Chesterfield when VE Day was announced.

He was on his way back to serving in the SAS after being blown up by a mine.

“I went out and got drunk like about a million others,” he said.

“We had a good evening, I got back to camp about one o’clock and got charged for being late.”

He said he had spent quite some time in the pub trying to strike up a conversation with another man until he realised he was actually looking at himself in a large mirror.

“It sounds daft, but that was a funny thing from the night. We’d already had a few too many then,” he joked.

Mr Borrie, who was the youngest member of the 1st SAS, serving for two years, encouraged people to remember “those that offered their life and those that gave their life” this VE Day.

Asked how he would be marking the occasion, he joked: “I won’t be getting drunk that’s for sure.”