Spike in migrant boats in part due to Covid lockdown, Home Office says 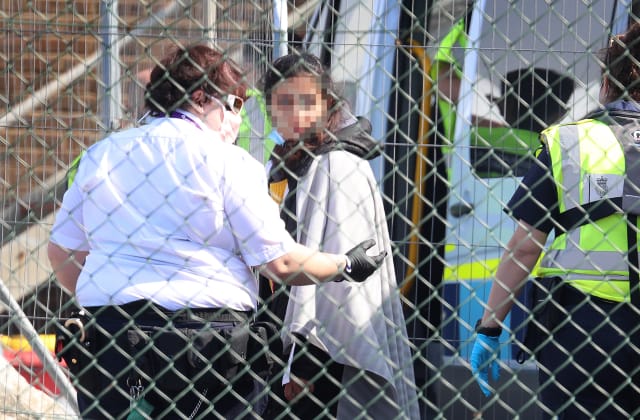 A spike in migrant boats making the dangerous crossing of the English Channel is linked to lockdown road restrictions at the border, the Home Secretary has said.

Priti Patel had a “very positive” call with her French counterpart about border security on Wednesday, the Home Office said.

It comes as 11 more migrants aboard an inflatable boat were intercepted by Border Force on Thursday.

Since lockdown began, at least 609 migrants have been brought to the UK, according to data gathered by the PA news agency.

The 11 individuals said they were from Iran, Iraq, Syria and Afghanistan.

Pictures taken in Dover on Thursday morning show a woman, believed to be from the migrant boat, being spoken to by officials.

Migrants brought ashore at Dover are assessed for symptoms of coronavirus but are not specifically tested.

The Home Office says the Covid-19 crisis has had no impact on its ability to deal with small boats crossing the Channel’s perilous waters.

Since lockdown was announced in Britain on March 23, at least 609 migrants have been intercepted by UK authorities and brought ashore.

This is more than half of the entire total for 2020, which stands at at least 987 as of Thursday afternoon.

In a report of her call with her French counterpart, Ms Patel emphasised it was “more important than ever” to work closely together.

The Home Office reported: “Both noted that the increase in small boat arrivals is in part due to restrictions of road crossing due to Covid lockdown.”

They discussed and agreed a number of proposals to tackle the crossings including:

– Increased deployment of forces, with adequate equipment, on the French coast, with UK financial support

– Returning migrant boats at sea back to France when possible