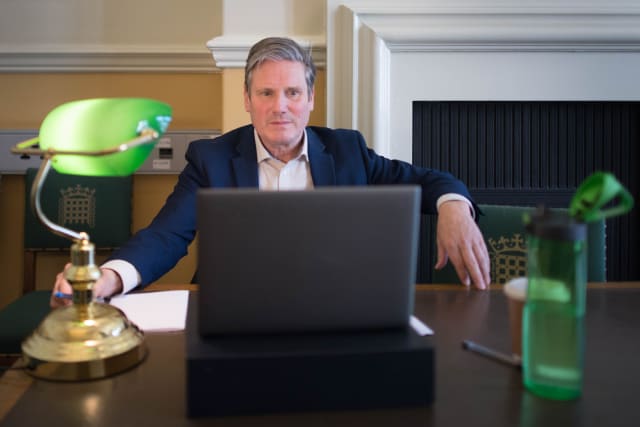 Sir Keir Starmer has been told to be more like SNP leader Nicola Sturgeon if he wants to win Scots back to Labour.

The new UK Labour leader staged a virtual town hall meeting with party activists and others in Glasgow, asking them what they thought the party needed to do to win back the trust of voters north of the border.

Hilary Marshall, a former Labour supporter, who said she had “defected” to the SNP, told him he should be more like the Scottish First Minister.

“I think if you could  be like Nicola, I might vote for you,” she told Sir Keir.

She stated: “Nicola is either a you love or you loathe her politician, but I think she is a politician that is very transparent and trustworthy, and I think the way she has handled the coronavirus issue she has shown if you give clear messages, people have greater trust in you.”

Ms Marshall complained that there had not been “effective scrutiny of the Tory Party in Westminster” from Labour – something she said the SNP and its Commons leader Ian Blackford had “done a very good job” on.

Sir Keir told Ms Marshall she was “exactly the sort of person I want to hear from” as he conceded that Labour could face a “long haul” in winning back voters.

He told another caller: “In the last election I felt quite strongly that people wanted change, I didn’t myself knock on many doors where people said ‘it’s all fine here mate’.

“But they didn’t trust the Labour Party to deliver the change that was needed. That is why the trust is so important.”

The new leader said: “In the end I think trust isn’t an on/off switch, you’ve got to earn trust, and that is a long haul and listening is at the heart of that.”

In the hour-long session, activist John Wilson told Sir Keir that Labour had “got it extremely wrong” by campaigning with Conservatives in the run-up to the Scottish independence referendum in 2014.

Meanwhile, Labour activist Zara-Maria Henderson said: “The main issue obviously in Scotland right now is the issue of independence, countless times on the doors I got people saying to me ‘I would vote for Labour in an independent Scotland’.

Sir Keir told activists Labour needed to be”working deep in our communities all of the time” in order to win back trust.

“I think the idea that any political party just tries to get its message across in an election campaign over a number of weeks is just wrong in principle,” he argued.

“We’ve got to be in and of our communities all the time, so that the trust is built up.

“We need to do it every day. I’m really conscious it is 364 days to the election in Scotland and so every single day counts here.”

Afterwards, former Labour MP Paul Sweeney tweeted: “Only one Labour MP has represented this city in the last five years. We must win all seven Glasgow seats at the 2024 election to form a Labour Government.”