Rare Harry Potter books saved from skip up for auction 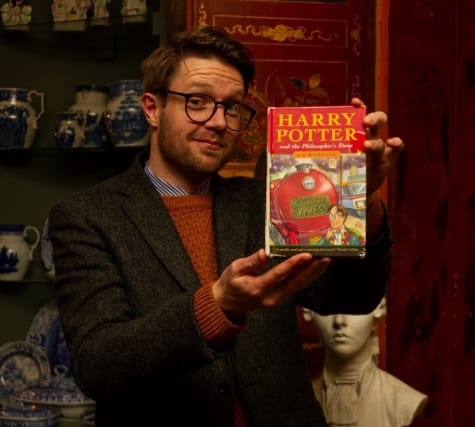 Three rare Harry Potter books are going under the gavel after being rescued from a school skip.

A first edition hardback of Harry Potter and The Philosopher’s Stone and two paperback first editions of the same novel are expected to fetch thousands.

The books were saved from landfill in 2008 by a Buckinghamshire teacher who spotted them in a skip, as the school was clearing out its library in preparation for an Ofsted inspection.

Valuers said hardback copies of the book, of which only 500 were printed in 1997, were as “rare as hen’s teeth”.

Of the original publishing run, about 300 were sent to schools and libraries, and contained various printing errors corrected in subsequent versions.

The books are going under the hammer, along with other Harry Potter lots, in an online-only auction being held by Hansons, of Derbyshire, at Bishton Hall, Staffordshire, on May 21.

Explaining how she came by the books, the seller, a 65-year-old grandmother who did not wish to be named, said: “It just seemed awful to throw them away, so I picked up about five Harry Potter books.

“I thought they might be useful for my children or grandchildren in the future.

“It was better than seeing them go to waste.

“At the time, I had no idea they were of any value and neither did the school.

“They’d been well read and the school always ensured its library was pristine for Ofsted inspections. ”

She put all the books in the loft, until her son mentioned to her they could be valuable.

“He investigated and a London business offered £4,000 for one of the paperbacks there and then, but they just went back into the loft,” she added.

“Last year we were watching a TV interview with Charles Hanson, owner of Hansons Auctioneers, about the sale of a Harry Potter first edition which sold for thousands at auction and decided to get in touch,” she said.

“They’re the holy grail for collectors.”

“Internally it’s very good, though, and could surprise us.

“The paperback first editions are in good condition and could fly above their estimates.”