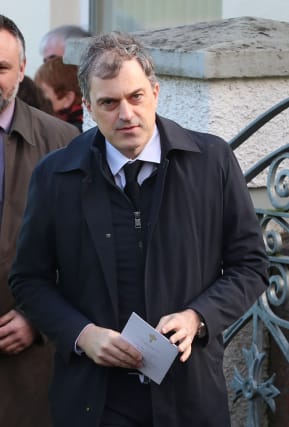 Northern Ireland’s next Assembly election should be postponed for a year because of the coronavirus crisis, former secretary of state Julian Smith has said.

More time is needed to tackle educational inequality and housing shortages once the devolved administration’s focus shifts from defeating the infection, he added.

The next Stormont poll is due in 2022 and Mr Smith said devolved ministers need an extended period to realise their priorities for Government.

He said: “I think giving this Executive and Assembly time would help,” and after a “decent” period voters may be able to take part in a more meaningful election.

The former cabinet minister acknowledged that polls tend to be dominated by constitutional questions surrounding Northern Ireland’s place in the UK.

“I think that as a result of Covid many things that would have happened in the Executive in the weeks following the restoration have obviously been delayed.

“I pay tribute to the fact they have done a budget.

“I do think that the trust issue and building of capacity amongst Northern Ireland politicians is important, but more importantly the thing that gave me confidence during this period was listening to voters.”

He was sacked as Northern Ireland secretary by Boris Johnson in February despite enjoying widespread support in the country.

The Conservative MP for Skipton and Ripon told the Northern Ireland Affairs Committee: “People want their services to work and Northern Ireland does work, but I genuinely think that now we have had this crisis we do need to provide time to get those things improved.

“The overarching improvements in health care, the need to start delivering on City Deals (regenerating greater Belfast and Londonderry) and infrastructure projects and the need to look at education and educational inequalities that still exist, the housing deficit.”

Stormont collapsed following Martin McGuinness’s resignation as deputy first minister in a row over a botched green energy scheme, and deepened to include a dispute over the place of the Irish language in public life.

January’s deal increased to up to six months the period before an election would have to be called following a similar resignation, as part of efforts to make the powersharing institutions less susceptible to collapse.

Mr Smith promised significant new funds from Westminster at the time the accord was signed.

On Thursday he reiterated his concern that within 48 hours charging for water had been ruled out by new ministers.

“It is inevitable that in order to be a full success some form of revenue-raising will have to happen.”

He said there was willingness to support Northern Ireland with extra money from Westminster in future.

“There is a huge hunger, there was when I was minister, from the Prime Minister and Government ministers to support the priorities of the New Decade, New Approach.”

He warned there had to be an understanding that Whitehall and the Government needed to be fair to Scottish, Welsh and English voters.

“If there is a prioritisation… and if there is reform happening… I think that the Chancellor and the Prime Minister are incredibly supportive of making this Executive work.”