Lights, camera, lockdown: Behind the scenes at BBC Breakfast with Dan Walker 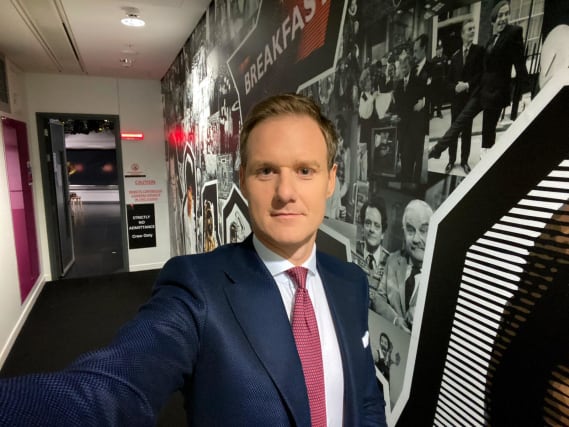 BBC Breakfast presenter Dan Walker has shared some insights into his working day during the coronavirus.

Walker took up his position on the famous red sofa in February 2016 following the departure of Bill Turnbull.

He and co-presenter Louise Minchin are among the news anchors who have had to adapt to working safely during lockdown and implementing social distancing within a busy TV studio.

Here is what the 43-year-old had to say about working for the BBC during the pandemic:

When does your day start?

"I get up at 11 minutes past three. I don't know why it's not 10 past three, it probably seems a bit early, 11 minutes past three seems like a I get a bit of a lie in. Last week I sent Louise a text at 3.25am saying 'have you got his piece of information we need for the programme?' I forgot that she doesn't get up until about 3.40am so I woke her up. She wasn't best pleased with that".

You go to bed at?

"This is where Louise and I are very different. When Bill Turnbull left Breakfast after 15 years the one piece of advice he told me, he said I'm sure you'll be alright but the one thing you need to do is manage your sleep, and I've spectacularly ignored him. I've done it for four years, but I just go to bed about 10.30-10.45am. I think Louise goes to bed about nine. So I don't really understand how I function on occasions... I tend to be a bit strange in the head by Wednesday!".

"I tend to read through everything that we need for the programme at home, so I read all of that until about 10 to four. I get to work at about 10 to five and then we have a meeting about five o'clock with Louise and the senior editorial team, which is greatly reduced to what it was pre-virus.

"To give you an idea numbers-wise, we have two shifts, so one shift starts from 9 at night and then you finish at the end of Breakfast at 9 in the morning. And then another shift, we call the day shift, from 9am until 9 that night. The day shift for a normal programme there'd be 25-30 people working in the office. At the moment we've got four or five.

You're doing your own hair and make-up?

"My kids find it hilarious. When I do Football Focus I have to do it at home, just put like a light bit on at home and my kids were coming up the stairs the other day and I'm staring in the mirror at the top of the stairs putting some anti-shine on my forehead thinking 'What has happened?'. It's a good skill to have up your sleeve. The first week I think I looked like an Oompa Loompa on a couple of occasions, but I think it's alright now".

Describe working for the BBC at a time like this

"You realise that whenever things go wrong people do turn to the BBC. I remember vividly the morning of the Manchester bomb, two years ago when again Louise and I were working together, she was down at the scene and I was in the studio. I remember that morning, I think our audience figures were three times what they would normally be. And certainly at the start of the coronavirus people were tuning in in their millions to watch and to know what was going on.

"And obviously you've got lots more people not working, and that's a real sort of, position of responsibility and trust to be in people's homes, particularly that time of the morning when they are having their breakfast or getting ready for home school or sitting with their children, it's quite a responsibility to be in that position and also to bring quite a few days of a mix of very sad and serious news, about death tolls and the spread of the virus and what's happening in other countries.

"What we've really tried to do on Breakfast is to find that nice mix between telling people what is happening and sharing the facts of how this virus is affecting us all but also trying to bring those uplifting, life-changing stories of people who have survived".

What are you looking forward to doing when life gets back to normal?

"It's something I just discussed with my kids two days ago. We were out on our sanctioned dog walk for the day and I said right come on, let's all come up with three things we'd love to do once this is all over. And theirs basically, all of them wanted to see their friends.

"All of them wanted a – I know this is bad – massive burger, one wanted some McNuggets. From my own perspective, my three things would be: I'm missing people: I'm missing that interactivity with family and friends; there's only so many zoom quizzes you can do.

"I miss the closeness of life, being able to hug somebody who is sad or upset, or somebody that you love. I think having that absent from life makes you realise how important that is.

"Also I'd just love to go to a cafe or a restaurant and have some nice food, that is something which is hugely undervalued.

"I think what sort of has come through this is our appreciation of the jobs other people do. I vastly appreciate the jobs that teachers do after struggling with home schooling.

"I have an incredible appreciation for make-up artists and those in the hairdressing profession.

"And my admiration – my sister is a nurse in Derby who works currently in an intensive care unit – and my admiration for health care professionals and key workers is just, I mean I've always thought they were amazing but to see the job that she and many others are doing at the moment in really trying circumstances, some of the decisions they are having to make, if one thing comes out of this that the NHS is better looked after, that will be a huge positive".