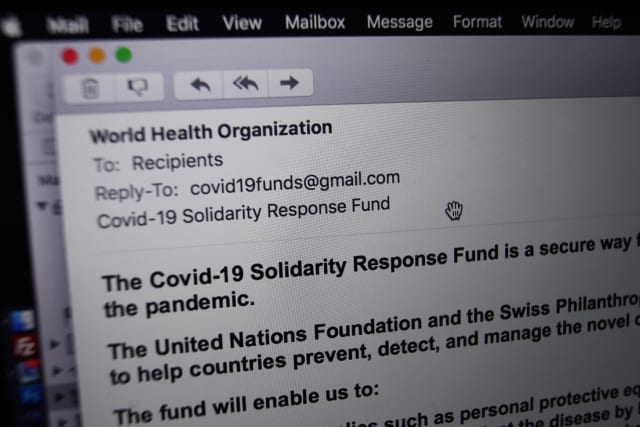 More than 160,000 suspicious emails were reported to a new scam-busting service in just two weeks amid an increase in coronavirus-related online fraud.

The National Cyber Security Centre (NCSC) – which is part of GCHQ – has taken down 307 bogus sites in response to alerts from the public.

Offers of fake testing kits, face masks and even vaccines were among the scams seeking to exploit the pandemic, notified to the Suspicious Email Reporting Service, which launched in April.

“This really is a phenomenal response from the British public,” said Ciaran Martin, chief executive of the NCSC.

“I would like to thank them for embracing our reporting service as well as the many organisations which have promoted it.

“While cyber criminals continue to prey on people’s fears, the number of scams we have removed in such a short timeframe shows what a vital role the public can play in fighting back.

“I would urge people to remain vigilant and to forward suspect emails to us. If it looks too good to be true, it probably is.”

Reports received by the service quadrupled after backing by MoneySavingExpert’s Martin Lewis, leading to more than 10,000 additional reports in just one day.

“There’s been an explosion of scam adverts in the UK,” Mr Lewis said.

“We’ve been fighting them on all fronts, I’ve even sued, but the toughest nut to crack is scam emails, because emails come from everywhere.

“That’s why the NCSC’s new report-and-remove function is so vital… at last, we can forward scams to report@phishing.gov.uk and know that someone will take action.

“Yet we need what I call ‘social policing’ too – everyone that can spot a scam must take up arms and report it to protect those who can’t.

“It’s why I’ve shouted it from the roof tops on my show, MSE and social media, and we’ve seen the rate of reports quadruple, which is proof people are ready to do their bit.”

Other bogus websites were also taken down, with some made to look like official Gov.uk and TV licencing sites, which attempt to trick people into handing over sensitive billing information.