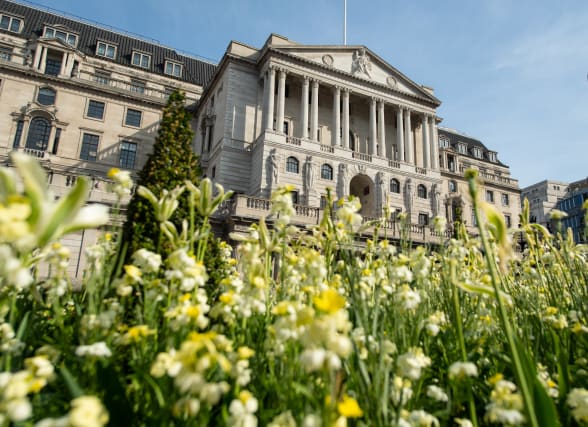 Investors continued to push the UK’s biggest shares upwards as they remain hopeful the economy could open up, and shrugged off dire financial warnings from the Bank of England

Ahead of the bank holiday weekend, the Bank of England warned that the UK economy could shrink by 14% this year, as businesses shut their doors to slow the coronavirus spread.

Millions of employees have been sent home to work, with millions more picking up a pay cheque under the Government’s furlough scheme.

However, the dire economic predictions, and another round of brutal jobs figures from the US, were not enough to dampen market optimism.

Traders had already priced in what they knew were awful economic conditions.

The news that mining giant Anglo American could list its South African coal mines put it at the top of the pile among London’s 100 biggest companies.

It was also one of several businesses that benefited from increasing oil and metal prices.

Brent crude oil firmly breached the 30-dollar mark and it had gained 4.5% shortly after markets closed in the UK.

“Saudi Arabia has lifted its selling prices for oil, and US producers have cut back on output. In addition to that, gasoline stockpiles in the US have been falling too, so that has all helped the oil market,” said David Madden, an analyst at CMC Markets.

On the continent, Germany’s Dax index and France’s Cac added around 1.5% each.

Meanwhile, the news that 3.2 million more Americans had filed for unemployment in the last week did not dampen spirits in New York where the S&P 500 rose 1.9% and the Dow Jones gained 1.8% at around 5pm UK time.

“Investors weren’t all that bothered by these job losses. Instead, focusing on Donald Trump’s strategy to reopen America for business, deaths be damned,” said Spreadex analyst Connor Campbell.

In company news, almost a quarter of Barclays shareholders voted for a plan to phase out fossil fuel funding at the bank. However the attempt was beaten by a board-backed plan, criticised by green campaigners for its lack of detail, to be carbon neutral by the middle of the century. Shares rose 4.5%.

AA investors sent the company’s stock up 8.2% after the breakdown specialist told them to expect a milder coronavirus hit than many had feared.

Despite a nearly 37% drop in sales during the its most recent quarter, Superdry shares gained 5.2% amid the news it was looking at its financing options.

Next shares added the same amount after it penned a deal to turn five former Debenhams beauty departments into its own new beauty hall concept.

Reach was another big winner, up 7.6.%, after the Mirror and Express publisher said sales had slumped 13.1%. Its digital sales were up 4.7% in the four months to April, it added.

Rolls-Royce took a 2.3% hit after it signalled jobs cuts could be on the cards in an announcement due later in the month.

But shareholders were more worried about their payouts, sending BT to the bottom of the FTSE 100 after it scrapped its dividend for the next two years. Shares fell 8.1%.

Two steps below BT in the list of the biggest losers on the index was British Airways and Aer Lingus owner International Consolidated Airlines Group (IAG) which revealed it does not expect to return to full capacity until 2023.