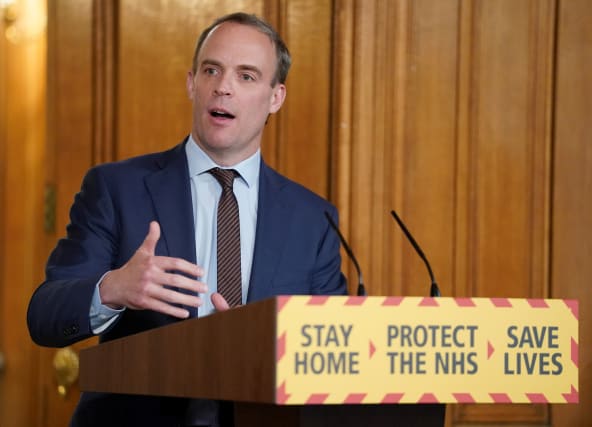 The Government is urging the public to stick with the current lockdown as the UK gets set for glorious weather over the bank holiday weekend.

Foreign Secretary Dominic Raab said the rules had not changed on social distancing and leaving home as the nation gears up to hear from Boris Johnson on Sunday on the way forward for easing restrictions.

Speaking at the No 10 daily press briefing, Mr Raab said any short-term changes in the restrictions announced by the Prime Minister would be limited in their nature and depend on the reproductive number – the R – of the virus.

He said: “Any changes in the short term will be modest, small, incremental and very carefully monitored.

“If we find in the future the R level goes back up or that people aren’t following the rules, we must have the ability then to put back measures in place.

“For the moment it is really important, particularly as people look towards a warm bank holiday weekend, that we continue to follow the guidance in place at this time.”

It comes after a day of tensions between ministers and the the devolved administrations in Scotland and Wales over the way forward in lifting the lockdown.

Downing Street has insisted the Prime Minister would be announcing only a “very limited” easing of the social distancing rules when he sets out his “road map” for the way forward in his address to the nation.

However, First Minister Nicola Sturgeon issued a warning that she would not be “pressured” by the Government at Westminster into easing restrictions “prematurely” in Scotland.

The Welsh Government also warned there was a danger of sending out “mixed messages” amid newspaper reports that pub and cafe gardens could be allowed to reopen and restrictions on sunbathing and playing outdoor sports relaxed.

“Even if different parts may move at slightly different speeds, the key thing is those decisions are made based on the science and the circumstances for each nation.”

Meanwhile, the R value – which refers to the number of people who can expect to contract coronavirus from an infected person – has risen in the last week, driven by transmission in care homes.

Mr Raab said the Government is “confident” it has the plan to decrease the infection rates in hospitals and care homes, where the R value is higher than in the community.

He said: “Testing is part of that but also it’s the movement of people in and out of those settings which is fuelling that transmission, so they’re both parts of that problem.

“There’s not a silver bullet here, it’s about putting all the different bits of the jigsaw together and having a strategic, holistic approach.”

Earlier, John Edmunds, professor of infectious disease modelling at the London School of Hygiene and Tropical Medicine, told the Commons Science and Technology Committee that about 20,000 people a day are still becoming infected with coronavirus – a figure that UK national statistician Professor Sir Ian Diamond agreed with.

Sir Ian told the Downing Street press conference: “Professor Edmunds is right that R has probably gone up a little bit from his last estimate and that is driven by the epidemic in care homes, and I would not divert from that.

“That gives us a real challenge to reduce the epidemic in care homes and it’s one that I think, over the next few weeks, from what I’ve seen, will happen.”

She said: “We need to focus equally not just on the residents but on the staff as well because these are quite closed communities.

“We have been talking about the R in the community, where everybody has done so well to bring that number down, but of course workers who are working in care and health settings also are part of their local communities, so we need to make sure that we address infection and prevention control measures, and really make them robust.”

– Official data suggests that more than 36,000 people have now died with coronavirus in all settings across the UK.

Speaking near his London home, Labour leader Sir Keir Starmer urged people to stick to the rules over the bank holiday weekend.

He said: “What I think is really important is that we continue the lockdown, we’re very clear that we all must follow that guidance.

“Until it changes, we must follow it and it’s very clear that that’s important for this weekend.”

Mr Johnson will set out the next steps in the Government’s response to the coronavirus in a broadcast to the nation at 7pm on Sunday.

Ministers are expected to convene over the weekend before the details are finalised after officials have had a chance to scrutinise the latest data on the spread of the disease.

Meanwhile, the continuing economic damage being wrought by the pandemic was underlined as the Bank of England warned of a 14% drop in GDP this year in the biggest fall on record.

Bank governor Andrew Bailey said that while the economy was expected to recover more quickly than it did after the 2008 financial crash, the effects would still be felt for “around a year” after the lockdown finally lifted.