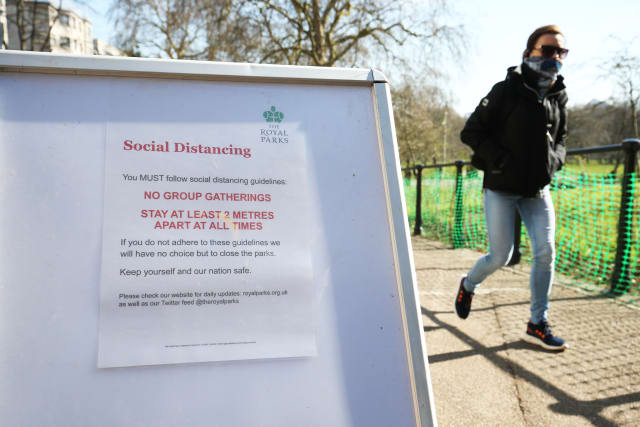 Boris Johnson will meet with ministers on Thursday to review whether it is safe to ease lockdown measures, as one of his Cabinet colleagues warned people to “not get too carried away” with what might be announced.

The Prime Minister will chair a Cabinet meeting for a legal review of the restrictions, which cover England, Wales, Scotland and Northern Ireland, to see what freedoms the public may now be able to enjoy while the spread of the coronavirus is kept under control.

The meeting comes as the Bank of England warned that coronavirus could see the economy plunge 14% this year in the worst annual fall for more than 300 years.

It also emerged that a Government-promised shipment of 400,000 protective gowns for NHS staff from Turkey has been impounded in a warehouse after falling short of UK standards.

The Government has come under increasing pressure to announce when schools and shops will reopen, whether strict social distancing rules can be relaxed, and when family and friends can meet up after more than six weeks apart.

The changes could include unlimited exercise, the return of some sports, park picnics, and the opening of pub and cafe gardens – but people would still be required to remain two metres apart.

The move could also see the Government scrap its “stay home” slogan, and encourage people to wear face coverings on public transport and in crowded places as some return to work.

Mr Johnson hinted he will announce a limited return to pre-pandemic life in an address to the nation on Sunday, with new measures set to come in as early as Monday.

But Northern Ireland Secretary Brandon Lewis urged people not to be too expectant ahead of the announcement, with the Government keen to avoid a second wave of Covid-19 triggered by relaxing measures too quickly.

He told Sky News: “I think it would be wrong to get too carried away.

“I think we’ve got to understand that this is a pandemic and a virus that spreads so easily that we have to be very cautious as we look at how we come out of the current lockdown.”

He added: “The worst thing that could happen would be to have a very fast, quick and dangerous second peak to this virus.”

Mr Lewis also described how the consignment of gowns, flown in by the RAF from Turkey last month, was deemed too poor in quality to be used by health workers.

He said: “There was a view that it was good enough PPE (personal protective equipment), it is only when it has got here that teams have looked at it again and taken a view that it is not up to the right standard and they’ve decided not to use it.

“If something isn’t right, if we’re not even sure about it then I think it is better to be safe and not use that product and stick with products we are confident are the right products and the right standards.”

Mr Lewis also told BBC Breakfast said the Government was “determined and confident” of reaching a testing capacity of 200,000 a day by the end of the month.

Downing Street made clear the new target, unlike the previous 100,000 a day goal set by Health Secretary Matt Hancock, was related only to capacity rather than the number performed every day.

It followed a continual drop in the number of tests carried out since Mr Hancock’s target was met on April 30.

Mr Lewis said: “But there has been a bit of an issue at the labs, there’s been a technical issue. That’s not surprising with a completely new test and a new diagnostics system we’ve put in place.

“But that technical issue is now dealt with so we’ll see that capacity and demand levels coming up.”

Latest figures from the Department of Health showed 30,076 people had died in hospitals, care homes and the wider community after testing positive for coronavirus in the UK, as of 5pm on Tuesday, up 649 from the day before.

But the total number of deaths involving Covid-19 that have been registered across the UK currently stands at 32,898.

On Thursday the Bank of England held interest rates at a historic low of 0.1% and warned of a “very sharp” fall in GDP of close to 30% over the first half and a “substantial” hike in unemployment.

It expects gross domestic product to fall by around 3% in the first three months of 2020 and then plunge by a further 25% in the second quarter, although it said there was uncertainty over the forecasts.