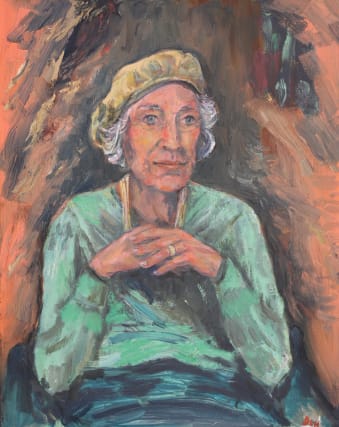 A new official portrait of Dame Vera Lynn has been unveiled to mark the 75th anniversary of VE Day.

Artist Dan Llywelyn Hall used video recordings and photographs of the singer, now 103, taken by her family during the lockdown period, for the piece.

The oil on canvas painting, entitled The Enduring Sweetheart, has been commissioned to raise funds for the Dame Vera Lynn Children’s Charity.

Llywelyn Hall, from Cardiff, said: “Dame Vera’s music has epitomised the human spirit in times of strife and is still at work as the nation’s morale-boosting sweetheart.

“She communicates longing of the soul in times of estrangement and is our herald of optimism during dark times of our nation.”

The portrait has been placed for auction on eBay to raise funds for the charity, with people also able to buy limited edition prints.

Dame Vera, the original Forces’ Sweetheart, became known for her morale-boosting visits to the front line during the Second World War.

Her most famous hit, We’ll Meet Again, will be sung by the nation just after 9pm on Friday.

She recently released a duet of the song with Katherine Jenkins to raise money for NHS Charities Together.

Speaking of the portrait, Jenkins said: “​Dame Vera is a true icon, beloved by many and an inspiration to me personally. Her songs provided a soundtrack of comfort to the nation and she continues to boost morale today.

“It’s wonderful to see her honoured in this beautiful portrait and I hope it raises lots of much-needed funds for her charity.”

Elaine Page described the portrait as a “fitting tribute” to Dame Vera and said she reminded people of the “courage and strength of character” needed to overcome adversity.

“She will forever be our enduring sweetheart,” she said.

Dame Vera established her charity in 2001 and it has since helped more than 600 families from across the south-east of England who have children with cerebral palsy and other motor learning impairments.

Like many charities, its ability to raise funds has been severely affected by the coronavirus pandemic.

Pilar Cloud, executive manager of the charity, paid tribute to Dame Vera as an example of “positivity and ingenuity”.

“Rather than focusing on all the things that we cannot do now, the team and I at the charity are trying to adapt to ensure that we can carry on providing support to our families so that their children do not suffer during this lockdown period,” she said.

“Their needs have not changed, but our service and certainly our ability to fundraise for it, has been profoundly impacted.

“We are in the midst of a funding crisis and are so incredibly grateful to Dan Llywelyn Hall for choosing to support us with the profits from the sale of his beautiful portrait and the prints of this charity’s founder, Dame Vera Lynn.”

– The fundraising page can be found at https://www.crowdfunder.co.uk/dame-vera-lynn-children-charity-ve-day-portrait.