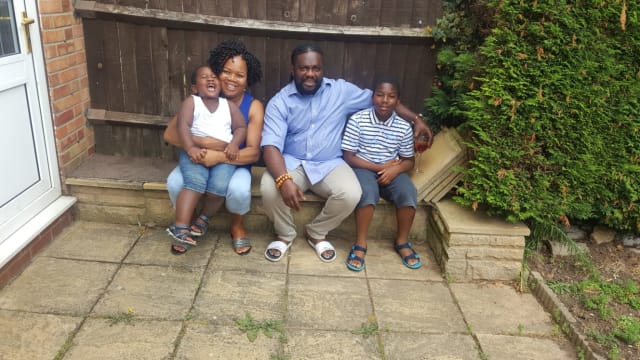 A mental health worker who died aged 39 after contracting coronavirus was “the best dad ever”, his grieving partner has said.

Charles Kwame Tanor died on March 11, leaving behind his partner, Prudence King, as well as his four-year-old son, Charles, and 12-year-old stepson.

Originally from Ghana, Mr Tanor joined a film company and produced short series programmes before moving to the UK around two decades ago.

Miss King said the family have been “devastated” by his death, after last seeing him being taken to hospital in an ambulance.

“My youngest son used to wait by the window for his daddy to come home from his night shifts, and he still does that,” she said.

“He keeps saying to me ‘When is Daddy coming home from hospital?’ It’s something I have to go through every single morning.

“I’m trying to make him understand, I say to him ‘ Look outside at the sky; if you see the stars, that’s where Daddy is.’

“My eldest is 12 and he understands, and he’s devastated. He just keeps crying and I don’t know how to console him.”

She added: “Charles loved his boys more than anything, he was the best dad ever.

“Everybody loved him at work, they loved him so much. He was so close with his colleagues, to the point that he would cook meals and take them to work.

“He loved cooking. That was one of his passions, along with film and photography.

“And in the summer he would go round and ask the neighbours if they needed any gardening to be done, because we’ve got quite a lot of elderly people around us.

“Everybody around knew him, and that’s how he was. I had the best partner ever, really.”

Mr Tanor’s course teacher at Coventry College, Iva Dyke, said: “I only began teaching Charles at the start of this year, but he was a lively and fun student, with a great enthusiasm for learning new skills.

“He was passionate about image creating and was always ready to help and engage with other students.

“Charles was a pleasure to have in the class. I was saddened to hear that such a caring and young life was taken. My deepest condolences go out to all of his loved ones.”