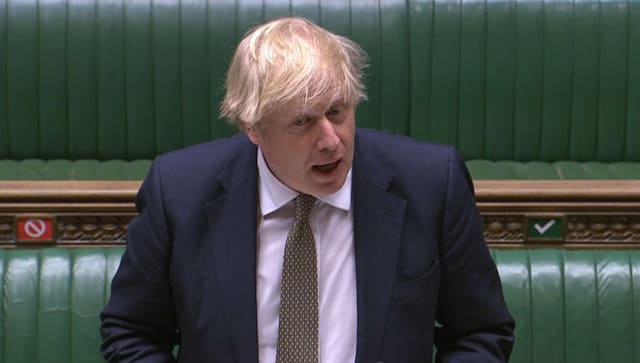 At his first Prime Minister’s Questions since his recovery from coronavirus and the birth of his son Wilfred, Mr Johnson said his “ambition” was for the new testing goal to be met by the end of the month.

His Commons appearance came ahead of a speech on Sunday where he is expected to set out plans for easing the lockdown as ministers hinted that cafes may be able to reopen in the summer months if they can provide outdoor facilities.

The Prime Minister suggested some of the measures he announces on Sunday could be implemented as soon as the next day.

“We have to be sure the data is going to support our ability to do this,” he said.

“That data is coming in continuously over the next few days. We want if we possibly can to get going with some of these measures on Monday.”

Mr Johnson faced Labour leader Sir Keir Starmer in the Commons for the first time and was challenged by accusations that the Government had been slow to respond to the outbreak, leaving the UK with the highest death toll in Europe at nearly 33,000 according to new figures.

The Government met its 100,000 a day testing target by the end of April but has failed to maintain that level in early May.

Mr Johnson said “the ambition clearly is to get up to 200,000 a day by the end of this month and then to go even higher”.

A “fantastic testing regime” will be critical to the UK’s long-term economic recovery, he said.

The route out of lockdown will rely on a test, track and trace programme to quickly identify new cases of coronavirus and prevent the further spread of the infection.

Although hospital deaths are falling, ministers and officials have struggled to get a grip on the crisis in care homes – where some of the most vulnerable people risk contracting the disease.

Mr Johnson said: “There is an epidemic going on in care homes which is something I bitterly regret and we have been working very hard for weeks to get it down and a huge amount of effort has been gone into by literally tens of thousands of people to get the right PPE into care homes, to encourage workers in care homes to understand what is needed.”

He said there had been a “palpable improvement” in the situation in care homes in recent days.

Sir Keir said “clearly there are ongoing problems” with PPE and that “it is obvious that this problem is going to get even more acute if and when the Government ask people to return to work” as more people will need it to do their jobs.

Mr Johnson replied said “it has been enraging to see the difficulties we’ve had in supplying PPE to those who need it” but the Government is now “engaged in a massive plan to ramp up domestic supply”.

Earlier, Health Secretary Matt Hancock suggested that as lockdown measures are eased the public could return to pavement cafes.

“There is strong evidence that outdoors the spread is much, much lower, so there may be workarounds that some businesses, for instance cafes, especially over the summer, may be able to put into place,” he told Sky News.

In a frank interview, Mr Hancock also said it would have been good if the UK had gone into the Covid-19 pandemic with the diagnostic capabilities of Germany, and added that experts are looking at how people who are shielding can be given more freedom before a vaccine is found.

Around two million people are shielding for their own protection.

“We may well be able to release some of those measures before a vaccine is available if we can get the number of new cases right down,” he said.

“If we succeed in doing that we will be able to take clinical advice on whether it is safe for those who are shielded to, for instance, hug their grandchildren.”

A total of 32,898 deaths have been registered in the UK where Covid-19 was mentioned on the death certificate, including suspected cases.

But Mr Hancock said people should be “very cautious” about comparing death tolls from different countries because of the UK’s large population and differences in whether fatalities outside hospitals are counted.

– Former government adviser Professor Neil Ferguson, a key figure in influencing the lockdown will not face further action by police after accepting he made an “error of judgment” by reportedly allowing his lover to visit him at his London home

– More than 69,000 small businesses had loans approved under the Government’s new bounce-back loan scheme in the first 24 hours after it launched on Monday, the Treasury said.

The current lockdown rules are expected to remain in place following a review of the evidence which is due by Thursday.

But Mr Johnson will use an address to the nation on Sunday to set out his “roadmap” for the way ahead.

He told MPs: “What the people of this country want us to do now is to suppress the disease, keep suppressing the disease and to begin the work of getting our country’s economy back on its feet.”

But it would be an “economic disaster” if relaxing the rules too far meant a second spike in the disease requiring the reintroduction of lockdown measures.

Scenes made from Lego help teach children about social distancing