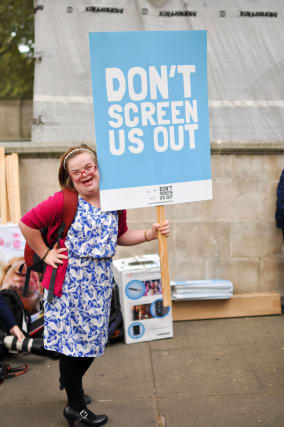 A campaigner with Down’s syndrome has urged Stormont to reject “hurtful and offensive” British Government laws on late-term abortion.

A major change liberalising access to terminations in Northern Ireland was introduced in March.

Heidi Crowter, a Down’s syndrome advocate, said: “Boris Johnson’s Government did not have to introduce abortion for babies with Down’s syndrome up to birth to Northern Ireland. They chose to do this.

“That’s both hurtful and offensive. My life has as much value as anyone else’s.

“I am asking all MLA’s (Members of the Legislative Assembly) to reject Westminster’s regulations – please don’t vote for more discrimination against people like me.”

Julian Smith was secretary of state when the regulations were being consulted on but was replaced by Brandon Lewis in February.

New official regulations allow terminations on request in Northern Ireland for the first 12 weeks of pregnancy and up to 24 weeks where there is a risk of injury to the physical or mental health of the pregnant woman or girl.

Down’s syndrome is caused by the presence of an extra chromosome in a baby’s cells. It affects a person’s learning abilities.

Ms Crowter wrote to Stormont party leaders requesting they reject any Westminster regulations that allow abortion on the basis of a child’s disability up to birth.

She is part of a campaign group which has previously urged that all non-fatal disabilities should be subject to the 24-week limit.

She added: “Do not make the mistake which was made in Great Britain in allowing discrimination against people like me just because we
happen to have Down’s syndrome.

“Please let Northern Ireland continue to be a country where disabled people are valued.

“Please do not let a law come into practice which will end lives on the basis of disability and stop people like me coming into the world.”

Abortion was legalised in Northern Ireland by Parliament last year following a long campaign by organisations like Amnesty International.