Cafes may reopen if they can provide outdoor facilities, says Hancock 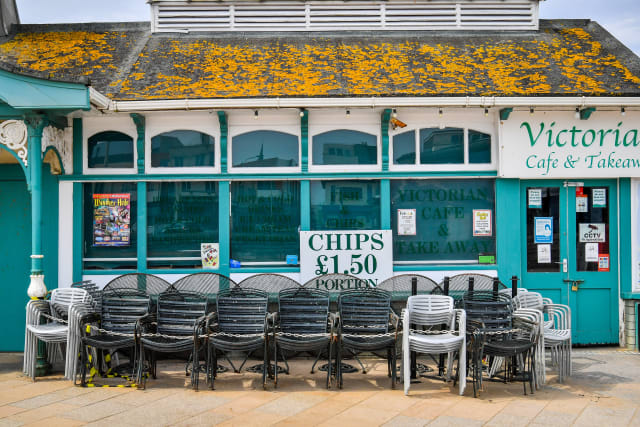 Cafes may be able to reopen in the summer months if they can provide outdoor facilities, Health Secretary Matt Hancock has said.

In a frank interview, Mr Hancock also said it would have been good if the UK had gone into the Covid-19 pandemic with the diagnostic capabilities of Germany, and added that experts are looking at how people who are shielding can be given more freedom before a vaccine is found.

Mr Hancock answered questions from viewers on Sky News, including one from a man who asked how he could safely reopen his cafe once the lockdown is lifted.

It comes as Boris Johnson is expected to publish a road map at the weekend on how restrictions may be eased, including whether it might be possible to exercise outside more than once a day or have picnics with immediate family.

Mr Hancock said: "The Business Secretary (Alok Sharma) is working on the rules for safe working so, when we get the rate of new infections down, we can work on how people can get back to work as safely as possible. And we are going to say more about that very shortly.

"There is strong evidence that outdoors the spread is much, much lower, so there may be workarounds that some businesses, for instance cafes, especially over the summer, may be able to put into place."

Mr Hancock said it would have been good if the UK had had the diagnostic testing capability enjoyed by Germany, but insisted the UK had caught up.

He said: "The Germans started with this enormous diagnostics industry. But if you look at other countries around the world we are miles ahead on testing and we are now one of the world leaders.

"It is true that Germany has a very high capacity – about the same as ours. So we have basically caught up with Germany that started with this massive capability. We are miles ahead of South Korea now. Absolutely."

Mr Hancock said there is no guarantee a vaccine for coronavirus will be found.

"If a vaccine can't be found then we have to learn to find a way to live with this virus, so that means getting the numbers down and holding them down through, for instance, mass-scale testing and then tracing the virus through a combination of technology and human contact tracers," he said.

He said people who are shielding for their own protection – around two million, according to NHS Digital – could be given more freedom if new case numbers are driven down.

"We may well be able to release some of those measures before a vaccine is available if we can get the number of new cases right down," he said.

"If we succeed in doing that we will be able to take clinical advice on whether it is safe for those who are shielded to, for instance, hug their grandchildren. That is right at the front of my mind."

Mr Hancock said it was too soon to say when schools might reopen as experts are still monitoring progress of the disease and need people to stick to social distancing measures.

"I understand the frustration of people wanting to know the answer – will it be June, will it be September, for what age groups?" he said. "We just don't yet have the data but I think we are coming to a position relatively soon."

He said the Government is unlikely to reduce the distance people should remain from each other, with the risk of infection increasing "exponentially" if the two-metre distance is shortened.

Mr Hancock also said people should be "very cautious" about comparing death tolls from different countries after figures suggested the UK had the highest number of recorded Covid-19 related fatalities in Europe.

"Firstly, we are one of the biggest countries in Europe and that matters, so there are smaller countries which naturally will have a lower death rate because they have got fewer people," he said.

Spain and Italy "don't include deaths outside hospital in their figures" so "you have got to be very careful about comparing like with like".

Mr Hancock added that he was left speechless by Professor Neil Ferguson's breach of lockdown rules and subsequent resignation from the Scientific Advisory Group for Emergencies (Sage).

Prof Ferguson resigned on Tuesday night after admitting he broke the rules by allowing a woman he was said to be in a relationship with to visit his home in lockdown.

But he said it was a matter for police whether they take any action against Prof Ferguson.

"Even though I have got a clear answer to what I think, as a minister the way we run the police is that they make decisions like this," he said.

"So I give them their space to make that decision, but I think he took the right decision to resign."

Mr Hancock said the Government has not seen any evidence to suggest Covid-19 was a man-made coronavirus.

Asked by a viewer whether it was more than a "coincidence" that there were two laboratories researching coronavirus in Wuhan before the breakout, the Cabinet minister said: "Well, we have looked into this but we don't have any evidence. There isn't evidence that this is a man-made coronavirus."

It comes as Mr Johnson is set to face Sir Keir Starmer for the first time during Prime Minister's Questions.

Sir Keir, who took over as Labour leader last month, has called for Mr Johnson to form a "national consensus" on easing restrictions while protecting public health.