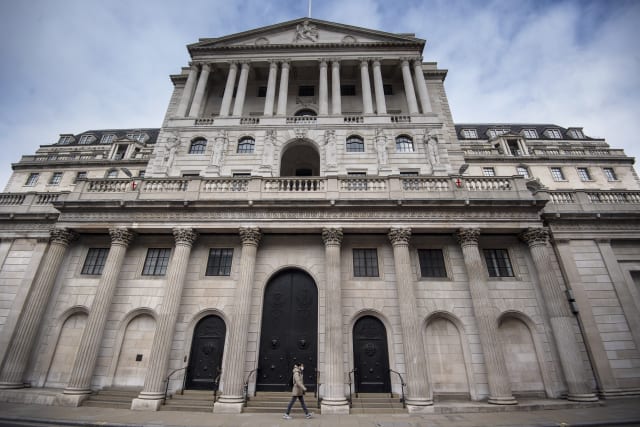 The Bank of England will decide whether to launch fresh emergency action on Thursday as it looks at the economic destruction caused by coronavirus.

Rates have already been slashed to the historic low of 0.1% and another £200 billion of quantitative easing (QE) has been unleashed as part of the Bank’s measures to try and keep the economy afloat during what is expected to be the steepest recession in living memory.

The Bank has largely exhausted its ability to cut interest rates, while most experts believe it will hold off on further QE – for now.

But it is likely to signal that more QE is on the way soon, while some economists predict it will not want to wait before firing up the money-printing presses to help jump-start Britain’s battered economy.

Its decision will be accompanied by the Bank’s eagerly awaited initial forecasts for the impact of Covid-19 on growth in its quarterly Monetary Policy Report.

The Office for Budget Responsibility (OBR) has already warned that the economy could shrink by as much as 35% in the second quarter if the lockdown lasts for three months and is only partially lifted over the following quarter.

George Brown, economist at Investec, said: “No matter how dire the Bank’s forecasts are, our expectation is that the MPC (Monetary Policy Committee) will be satisfied in making no major adjustments to its existing policy stance on Thursday.

“If the committee had felt that further easing was necessary, we doubt it would have waited for a scheduled meeting to do so, but would instead have acted swiftly as it did in March.”

Experts believe the Bank may look to publish a range of scenarios rather than a central forecast, similar to the approach used for its work on the impact of Brexit.

While the Bank’s view on the possible scale of the contraction will be closely watched, so too will its outlook on the shape of the recovery.

The OBR based its assumptions on a sharp V-shaped rebound, with gross domestic product (GDP) likely to jump 25% in the third quarter and a further 20% in the final three months of 2020.

But the Bank is thought likely to take a more pessimistic view as the lockdown inflicts damage on firms and with expectations that social distancing will remain in some form for many months.

Members of the Bank’s nine-strong MPC have already begun signalling in recent speeches that the recovery may not be as sharp as first hoped.

Results of the closely-watched PMI surveys for the main three sectors of the economy have pointed to a drop in activity of historic proportions – with the worst readings ever recorded for the services and construction sectors.

But there is a chink of light amid the gloom, according to Samuel Tombs at Pantheon Macroeconomics, who believes the “nadir of this recession … appears to have passed”.

He said the PMI surveys suggest that mid-April was the low-point for the coronavirus hit, with activity beginning to recover in May despite the ongoing lockdown.

“Though with several sectors of the economy set to remain closed for business throughout the summer and consumers’ confidence torn to pieces by Covid-19, we expect only about half of the second quarter’s huge drop in GDP to be reversed in the third quarter,” he added.