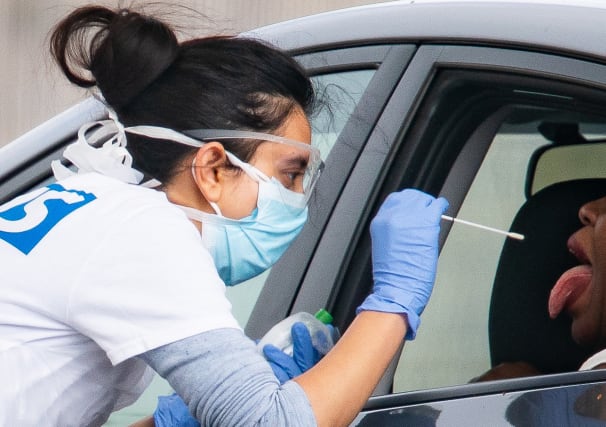 As officials endeavour to meet this next goal, the PA news agency looks at some of the key dates in the UK’s testing capabilities since the start of the coronavirus crisis.

Health Secretary Matt Hancock tells the House of Commons that the UK is “ready to respond appropriately” to any cases of coronavirus that emerge.

“The UK is one of the first countries to have developed a world-leading test for the new coronavirus,” he says.

Mr Hancock updates the Commons after the first positive coronavirus tests were recorded in the UK, telling MPs that “testing worldwide is being done on equipment designed in Oxford”.

The NHS is testing a “very large number” of people who have travelled back from coronavirus-stricken countries, Mr Hancock tells MPs, but does not mention a specific number.

Faced with increasing calls from MPs for faster and wider testing, Mr Hancock says ministers are “absolutely ramping up the testing capabilities” – but once again does not reveal how many checks are being carried out.

He dismisses testing for everyone, adding: “Testing people who do not have symptoms is not reliable and is counterproductive, so we will not be doing it.”

Contact tracing and widespread community testing is abandoned as the Government moves into the “delay” stage of its coronavirus plan.

England’s chief medical officer Professor Chris Whitty tells a Downing Street briefing it is “no longer necessary for us to identify every case”, with only those in hospitals to be formally examined.

Later that day, Prof Whitty defends the Government’s position on testing at the daily briefing.

“We do intend to continue to scale up testing,” he says, adding that efforts were already “substantial” – with more than 44,000 tests conducted overall.

A new testing facility for coronavirus opens in Milton Keynes, which Mr Hancock says will allow the Government to “ramp up” testing numbers.

Earlier that day, former health secretary and chair of the Health and Social Care Committee Jeremy Hunt urges the Government to commit to a testing timeline.

During Prime Minister’s Questions, Mr Johnson claims that testing has been a priority for “weeks and weeks”, but he does not offer a timetable on testing for healthcare workers.

On the same day, NHS England’s medical director Professor Stephen Powis tells LBC that testing is being expanded, with the hope of carrying out “hundreds of thousands” of tests per day in the coming weeks.

Sir Simon Stevens, NHS chief executive, announces that testing is to be rolled out for NHS frontline staff.

Cabinet Office minister Michael Gove claims the Government has hit its initial target of 10,000 tests per day for the wider public.

An ambitious goal of reaching 100,000 tests for coronavirus per day by the end of April is set by the Health Secretary.

The Health Secretary describes the current level of coronavirus testing as “frustrating”, with figures the day before just over 18,000.

Later that day, testing is expanded to more frontline workers, including to police and prison staff, fire and rescue workers, and local authority staff working with vulnerable people or rough sleepers.

Millions of people become eligible for a coronavirus test under an expansion of the testing programme for essential workers and their households, announced by Mr Hancock.

The Government has a “lot of work” to do to hit its 100,000-a-day testing target, Mr Hancock admits at a Downing Street briefing – with just 37,024 tests carried out the previous day.

The Health Secretary says the Government has hit its testing target, calling it an “incredible achievement”, with 122,347 tests performed in the 24 hours up to 9am on May 1.

But questions are raised over how the tests have been counted, after recent changes mean newer home test kits are counted while being dispatched.

England’s chief scientific adviser Sir Patrick Vallance tells MPs on the Health and Social Care Committee that ramping up testing capacity quicker would have been “beneficial” to the UK’s response.

At the same committee, Dr Harries admits that had there been unlimited capacity, a “slightly different approach” to testing could have been taken.

Meanwhile, the Government misses its testing target for the third day in a row.

During Prime Minister’s Questions, Mr Johnson says “the ambition clearly is to get up to 200,000 a day by the end of this month and then to go even higher”.