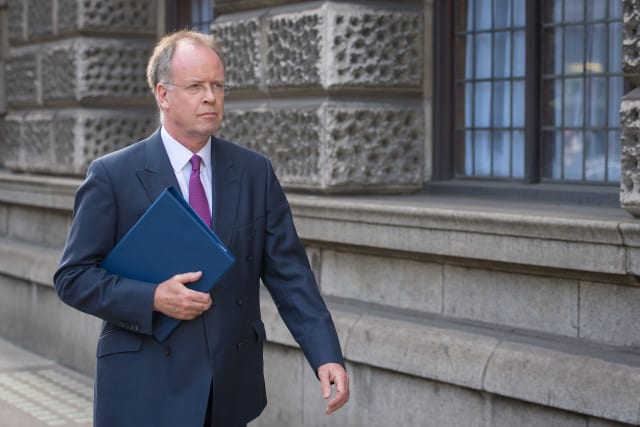 The chief judge of the Old Bailey has heralded a brave new world of criminal justice, with technology playing a part long after the pandemic ends.

As a schoolboy growing up in the suburbs, Judge Mark Lucraft had no idea he would one day lead the historic Old Bailey through a national crisis.

Despite having no family background in law, he has risen to take the top job at the Central Criminal Court at a time of massive upheaval.

Having survived Second World War and IRA bombs, the heart of the criminal justice system is now poised not only to deal with the fallout of the coronavirus pandemic, but to see lasting change in the way it uses technology.

In an exclusive interview with the PA news agency, the Old Bailey’s new head judge hailed remote video hearings as he set out his aims to continue a legacy of modernisation, diversity and openness.

Judge Lucraft QC has been temporarily juggling his responsibilities as Chief Coroner for England and Wales with his new role as Recorder of London.

He said: “It’s a very odd time to be taking on a new job, taking on the responsibilities that come with being the Recorder of London.

“But I could not quite believe it when I was told that I had been appointed.

“Sadly, both my parents died – my mother 20-odd years ago, my father three years ago. I know they would be very surprised their son had become the Recorder of London.

“When I was studying for law, my mother used to cut out clippings from the Guardian, quite often they were stories about cases at the Old Bailey.

“I sometimes wonder, I have throughout my career, what they would think that here I am now being the senior judge.”

He said it is a “great honour” and a “complete departure” for the son of a clergyman father and teacher mother from Wood Green in north London.

The Old Bailey already hosts various youth projects and Judge Lucraft is keen to continue to inspire and educate the next generation.

He said: “When I was studying for my A-levels, I did not really have much idea of what I wanted to do.

“But a fairly forward-thinking careers teacher at my school suggested ‘Well, what about reading law at university?’ and he sent me to meet a high street solicitor.”

Judge Lucraft went on to read law at university in Kent and carve a career as a barrister, judge, coroner and editor of Archbold’s law book.

As coroner and judge it was a privilege to hear the “amazing stories of human bravery” in court, he said.

“You see all aspects of life sitting as a judge, and you do listen to some of the most amazing stories.”

On the recent inquests for those killed in London terror attacks, he said: “We would like to think we would react in a similarly brave way but I’m not sure I would necessarily put myself in that bracket.

“It was astonishing to listen to the testimony that many people gave in the course of those inquests.

“Many people who give evidence think they haven’t done as much as they could have done, yet you listen to it and think ‘Goodness gracious me, I’m absolutely staggered at what you have managed to do to try and save your friend’, and often people they did not know at all.”

Since the Old Bailey closed for jury trials during the Covid-19 lockdown, staff have been “absolutely fantastic” at getting to grips with video hearings to deal with urgent cases, Judge Lucraft said.

He called for patience until the Lord Chief Justice allows trials to restart when it is safe and with strict social distancing.

The immediate challenge will be to deal with defendants waiting to be sentenced, and giving grieving families of victims the chance to move on, he said.

Two ongoing Old Bailey trials are also waiting to resume, while delayed trials are stacking up, some with young defendants in custody.

Judge Lucraft said: “The Coronavirus Act enables us to conduct hearings through remote means and use technology to help us to get trials working.

“But it’s important each stage of that process is thought about very carefully.

“There will be many things that we will not go back to doing the same way in our everyday lives and that will be the same thing for the Criminal Justice System.”

Technology can help streamline the system, he said.

“Very often we have people who have travelled for some time and from some distance to take part in a short hearing in the Crown Court, probably a pre-trial hearing.

“The way we have had to adapt very rapidly shows that we can do those hearings using modern technology in a way that will stay with us long after this pandemic has passed on.

“I think that will be a positive move in the right direction.”

Judge Lucraft hopes moves to make courts more accessible, including filming judges as they pass sentence, will not be delayed for long.

Having a more socially diverse judiciary is an “enormous benefit” and he will build on the work of his predecessor.

He said: “I started to sit at the Old Bailey five years ago on secondment and the judges were predominantly male and white and there were just two female judges there.

“Now there is a more gender-diverse, background-diverse judiciary and I hope to build on the fantastic work Mr Justice Hilliard did in that department.”