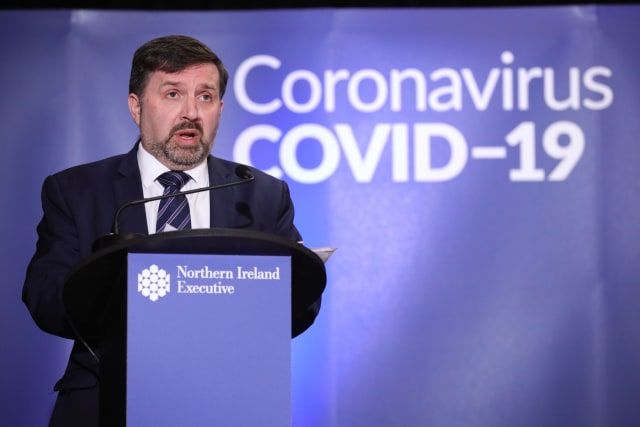 Northern Ireland’s health minister has urged the adoption of a single Covid-19 contact-tracing app across the UK and Ireland.

Robin Swann said if it was not possible to have the same app, then it was important to ensure the two systems were compatible, to avoid issues around cross-border movement.

The UK and Ireland are already set to differ in regard to how their apps will analyse contact data.

The UK app, which is currently being trialled on the Isle of Wight, uses a “centralised” system, with all data sent to a central server for analysis.

The Irish Republic’s app will see data matching take place on an individual’s device, without the need to send it to an external server.

“Ideally I would like to see one app used across these islands because it means no matter where an individual is travelling once we come out of lockdown, whether east-west or north-south, that that same platform, that same app can be utilised,” he said.

“And that’s the challenge and piece of work that has to be done over the next couple of weeks.

“There’s conversations that we are having across these islands to maybe see if they may not be the same app but to make sure that they are compatible.”

At the daily Covid-19 briefing at Stormont, Mr Swann was also asked about the Irish Government’s failure to brief the Northern Ireland Executive on details of its phased recovery plan before it was published on Friday evening.

Mr Swann said it was “good manners” to share information with neighbours but he acknowledged that time constraints may have prevented that last week.

“Would I have liked to see more of a conversation? Yes,” he said.

“Was it politically possible for them to do that? That’s a call for the Irish Government to make.”

Mr Swann added: “Good manners is to talk to your neighbours and to make sure you know what you’re going to do.

“Whether it’s always possible in these certain situations isn’t always practical at this minute in time.”