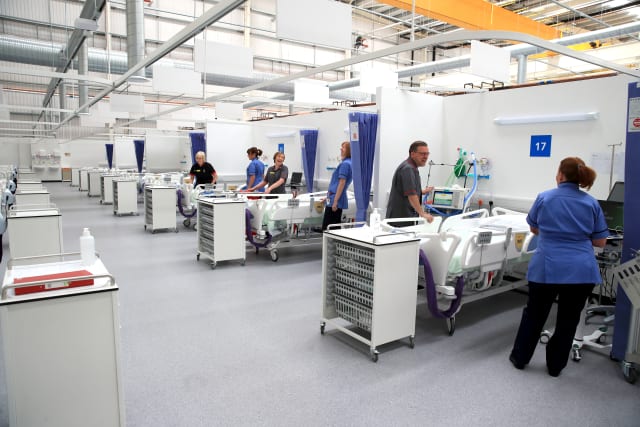 A new Nightingale hospital that was officially opened and put on stand-by will be ready to treat coronavirus patients in the future, the NHS senior official who oversaw its construction has said.

The Countess of Wessex, in a message played at the official opening of the new 460-bed unit in Sunderland, described the hospital as a “beacon of care, a beacon of reassurance, of strength, of compassion and a beacon of innovation”.

More than 300 workers were at the site beside the Nissan car plant, turning an empty shell of a building into a Nightingale unit ready to take the pressure off hospitals in the North East.

Ant and Dec joined sports stars Alan Shearer and Ben Stokes via video at the opening ceremony which saw them and other famous faces pay tribute to the NHS staff, military, contractors and volunteers who worked to built the centre in just weeks.

After the ceremony, Martin Wilson, executive lead for the hospital, said: “It has taken a real sense of common purpose, there has been a national crisis that we all needed to step up to, we’ve had staff working 24 hours a day, seven days a week for just over a month to make a 460-bed hospital.

“We designed this hospital to be really flexible so that we can respond to whatever the NHS needs us to do to support the hospitals right across the region.

“It’s really encouraging to see the impact social distancing has had with reductions in the number of patients in hospital but we have to be prepared that might not continue and we might see additional pressures later in the year.

“This hospital will be ready, on stand-by, that if we do need to open for patients, we can do that with less than a couple of weeks’ notice.

“There are three great news stories today, one is the NHS is doing a great job as it is, secondly, that social distancing is really working and it’s reducing the number of cases, and the third one is that we now have a Nightingale hospital here ready to respond if we need it for whatever comes our way in the months ahead.”

In a video beamed into the opening ceremony, Health Secretary Matt Hancock said the hospital was evidence of the NHS at its “life-saving, problem-solving, innovative best”.

He said: “Of course, we all hope that these extra beds will not all have to be used but I know you built this facility in a way that means you can adapt the hospital to changing clinical needs as work through the emergency and into the recovery phase continues.”

The official opening followed the news that other Nightingale units elsewhere in the country will be mothballed.

Sir Simon Stevens, NHS chief executive, said the temporary hospital in the North East could play a role in convalescence and rehabilitation.

In a video message, he said: “Over the last six weeks the NHS has gone from a situation where we were looking after a few hundred coronavirus patients to having to look after 19,000.

“Although it pleasingly looks as though we may be coming through the peak of the number of hospital in-patients, the reality is coronavirus is going to be with us for months, if not years to come, so it makes absolute sense to have the buffer capacity in the event it is needed.

“Although we hope for the best, we prepare for the worst.

“There’s no doubt, whether it is for coronavirus patients, or convalescence or rehabilitation or other types of patients, it makes complete sense to have this reserve capacity that the Nightingale hospitals represent.”

Stars and celebrities paid tribute to the workers who made it possible, in a series of videos played at the ceremony.

Ant McPartlin, in a split screen with his TV partner Declan Donnelly, said: “Even if it is not needed, it has been a magnificent feat of pulling together, and the speed of the transformation will be an enduring symbol of what the great people of this area are capable of.”

He said it was an honour to follow in the footsteps of Captain Tom Moore – now a Colonel – who last month was asked to open Yorkshire’s Nightingale Hospital in Harrogate.

TV host Steph McGovern, who is from Middlesbrough, said: “The fact you are going out there and looking after everyone in this time, which is just mad, and putting others first, before yourself – you are amazing. “Thank you, from the bottom of my heart.”

England and Durham cricketer Ben Stokes added: “Your continuous hard work is massively appreciated by all of us, you really are the superheroes of today.”

The hospital was created for patients from across the North East and north Cumbria and will be run by the Newcastle Hospitals NHS Foundation Trust, which has specialist knowledge of infectious diseases.

Staff – including nurses, physiotherapists and doctors – will come from NHS trusts across the region.