One person believed dead after ‘stabbing’ at village Co-op 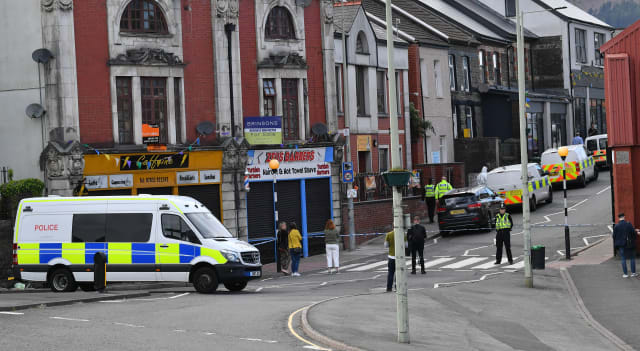 One person is believed to have died and several others have been injured following reports of a stabbing in a village Co-op in south Wales.

The emergency services are at the scene and South Wales Police said one woman had been arrested after a “serious incident at the location”, with the public advised to avoid the area.

Ravi Raj, 35, manager at the Pen Y Graig post office, said he had seen people running from the Co-op, some bleeding, and that he believed that there had been a death.

“There was a woman attacking four different people with a knife,” he said.

He said that the scene had been blocked off quickly by police.

“The police arrested [the suspect], she was inside. I wasn’t inside the shop but I walked down the road when the people were running out so I just wanted to see what had happened,” he said.

“I couldn’t go inside because it was already blocked. I heard there was a lot of blood inside the Co-op.”

Another witness told the PA news agency: “I just saw a hat and cans on the floor outside the Co-op as I was pulling up and thought ‘That’s strange’, then paramedics arrived.

“My husband went to go into the Co-op but got stopped by people who told him that there was a woman inside with a knife who was stabbing people.

“I stayed in the Jeep and more police and paramedics arrived and they went to a man who was in the van parked in front of my Jeep.

“This was the man who had been stabbed repeatedly, they took him out of the van and placed him into the ambulance.”

A takeaway owner said a woman came into his shop bleeding following the incident, though he had not been present at the time.

A man who answered the telephone at the Co-op store said: “Really sorry, not answering anything.”

Businesses in the village have been told to lock their doors, as police and ambulances arrived.

Rhondda MP Chris Bryant tweeted: “I’ve been informed of the horrific events in Penygraig and will keep people updated as soon as I have further news.”

Leanne Wood, Plaid Cymru Assembly Member for Rhondda, said: “Most of the people in our small, close-knit community of Pen Y Graig will be left feeling shocked after the news tonight of a serious incident, a violent incident in our local Co-op.

“I know the staff there, I know most of the regular shoppers there, and it’s a high street that is different to no other in Wales.

“My thoughts are with the staff in the Co-op as well, who must have been traumatised by events there this afternoon.”

Andrew Morgan, leader of Rhondda Cynon Taf County Borough Council, said: “My thoughts are with the families and friends of those involved in this awful incident.”

A South Wales Police spokesman said: “One woman has been arrested and is in police custody. Police and paramedics are currently at the scene.

“The public are asked to avoid the area until further notice.”

A Welsh Ambulance Service spokesman added: “We were called today at approximately 1.50pm to reports of an incident on Tylacelyn Road in Tonypandy.

“We sent one rapid response vehicle, three emergency ambulances, two advanced paramedic practitioners and our hazardous area response team, who were supported by an air ambulance.

“Four people were taken by road to Cardiff’s University Hospital of Wales and the Royal Glamorgan Hospital.”