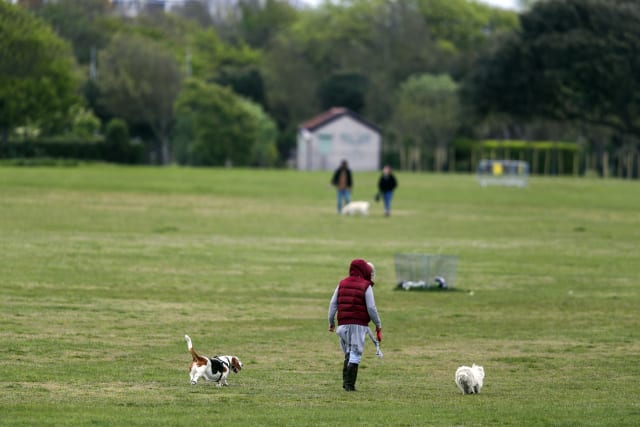 Lockdown restrictions could be eased for outdoor activities, officials have indicated as the UK’s declared death toll from coronavirus passed Italy’s.

The grim milestone was reached as official figures showed the death toll was more than 32,000 and analysis by the PA news agency found at least 140 NHS and care workers have lost their lives.

Despite the mounting human cost of the pandemic, ministers are confident the UK is past the peak of the outbreak and have begun drawing up plans for the eventual lifting of the restrictions imposed to stop the spread of coronavirus.

Downing Street indicated that “easements” were being considered – along with possible tightening of rules in other areas.

The existing lockdown restrictions are expected to remain in place following a review of the evidence due to be carried out by Thursday, but Boris Johnson is expected to set out a “roadmap” of future steps later in the week.

Scottish First Minister Nicola Sturgeon – who has been closely involved in UK-wide decision-making through the Cobra system – set out her own blueprint for lifting the lockdown on Tuesday.

Among measures under consideration in Scotland were the prospect of joining a social “bubble” – a small, defined groups of friends and family from different households – for gatherings, even if that was only possible outdoors.

The Prime Minister’s official spokesman confirmed the possibility of easing restrictions outdoors was also under consideration in Westminster.

“Broadly the scientific and medical experts have been clear that there is less likelihood of transmission of this disease outdoors than indoors,” the spokesman said.

“That will obviously be something we are considering as part of the review.”

The prospect of the UK edging towards life after lockdown came as figures showed total of 32,375 deaths involving Covid-19 have now been registered across the UK.

The official number of Covid-19 deaths in Italy, the European country which was first to experience the true horror of coronavirus, stood at 29,079 as of 6pm on May 4, according to the ministry of health in Rome.

But the full picture in both countries will not be known for some time, and Downing Street warned against comparing deaths across different countries.

– Virgin Atlantic announced plans to cut more than 3,000 jobs and end its operation at Gatwick;

– Experts said lockdown restrictions should be eased “very gradually” in order to maintain public trusty, according to a newly-published paper from a scientific pandemic influenza group which looks at behaviour and is advising the Government;

– Chief scientific adviser Sir Patrick Vallance said fewer than one in six people are thought to have had coronavirus so far;

– Education Secretary Gavin Williamson said there would be a “phased approach” to reopening schools;

– Office for National Statistics figures showed there were 2,794 care home deaths in England and Wales linked to Covid-19 and registered in the week ending April 24, up from 2,050 during the previous seven days.

The Government’s route out of lockdown will depend upon the effectiveness of its test, track and trace programme, designed to identify cases of coronavirus and people who have been exposed to them.

Health Secretary Matt Hancock has dismissed concerns about the new NHS Covid-19 app which is is central to the project.

He said concerns about the app expressed by groups such as Amnesty International UK – which warned they are “opening the door to pervasive state surveillance” – are misplaced.

“The purposes of this are purely and simply to control the spread of the virus, which is really important,” he told BBC Breakfast.

“We’ve all had to give up significant infringements on our liberty – for instance, with the social distancing measures and the lockdown – and we want to release those, and this approach will help us to release them.”

The app uses Bluetooth to track and trace contacts between users – alerting people if someone they interacted with has displayed symptoms or tested positive for the virus.

Officials insist it is designed with privacy and security “front of mind”, with the data stored on an individual’s phone until the point they contact the NHS to report symptoms and request a test.

However, Amnesty International UK director Kate Allen said ministers need to explain why – unlike other European countries – Britain is establishing a central database to store information.

“We remain concerned that the Government is using the coronavirus pandemic to normalise technologies that threaten our privacy rights, and which the public would not accept in ordinary circumstances,” she said.

Ministers have said that if the pilot on the Isle of Wight – which began on Tuesday with NHS and council staff – is successful, the app could be rolled out across the country within weeks.

Mr Hancock said the more people who sign up to it, the more effective it will be.

Labour leader Sir Keir Starmer said he hopes the trial succeeds but warned that the Government needs other contact tracing measures in place as well.

He told BBC Radio 4’s Today: “If you put all your eggs in the basket of this particular app – which I want to work as much as anybody else – a) it may not work, or b) it may be that not enough people take it up.”