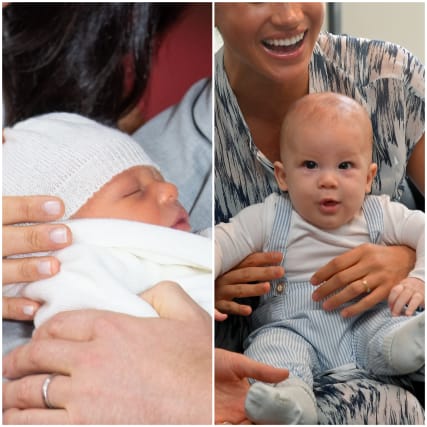 Archie Mountbatten-Windsor, who is celebrating his first birthday, is the Queen and the Duke of Edinburgh’s eighth great-grandchild.

The Duke and Duchess of Sussex’s son, who is seventh in line to the throne, arrived on May 6 2019, weighing 7lb 3oz.

Buckingham Palace announced Meghan was in labour just before 2pm that day, but in fact the American former actress had already given birth more than eight hours earlier at 5.26am.

An overjoyed Harry, speaking at Windsor Castle’s Royal Mews, confirmed the news of his son’s arrival, saying: “I’m very excited to announce that Meghan and myself had a baby boy earlier this morning, a very healthy boy.”

He added: “As every father and parent will ever say, you know, your baby is absolutely amazing, but this little thing is absolutely to die for, so I’m just over the moon.”

Two days later, baby Archie made his world debut wearing a knitted white hat and wrapped in a shawl in the historic surrounds of Windsor Castle, with his proud parents.

Meghan described him as having the “sweetest temperament”, saying: “He’s really calm.”

She added: “It’s magic, it’s pretty amazing. I have the two best guys in the world so I’m really happy.”

Archie Harrison Mountbatten-Windsor is not entitled to be an HRH nor a prince.

Harry and Meghan chose not to use the courtesy title Earl of Dumbarton, which Archie would have been allowed, nor to style him Lord Archie Mountbatten-Windsor, making a personal decision he should be a plain Master.

The couple revealed their son’s name after first introducing him to the Queen and the Duke of Edinburgh at Windsor.

Archie means “genuine”, “bold” and “brave”, while Harrison comes from “son of Harry”.

Harry and Meghan said last month that the Greek word “Arche”, meaning source of action, was their inspiration, and they will name their new charitable organisation Archewell.

Archie’s place of birth was kept a secret until his birth certificate revealed he was born at the private Portland Hospital in London.

Like most royal christenings, Archie’s was private, but Harry and Meghan also decided not to release details of their son’s godparents.

Meghan and two-month-old Archie joined Harry at the King Power Royal Charity Polo Day in July, alongside the Cambridges.

The newest member of the royal family was cradled by the duchess as she watched her husband play in the charity match against his brother the Duke of Cambridge in the Berkshire sunshine.

Archie later went on his first official royal tour when the Sussexes travelled to South Africa in September.

The royal baby stole the show by giggling, smiling and captivating the anti-Apartheid movement hero.

Harry said about his son: “He’s so busy, constantly wanting to stand.”

Meghan revealed how Archie was growing fast when she met military families at a coffee morning in Windsor in November.

“Archie just got two teeth. Two tiny ones, right there,” she said, pointing to the middle of her own bottom row.

The youngster’s first Christmas was spent away from the royals and in Canada with his parents and his maternal grandmother Doria Ragland.

The Sussexes, who had spoken of their struggles with life in the public eye and launched legal action against the press, were taking a six-week break overseas from royal duties, but it ended up being more permanent.

In January, Harry and Meghan returned to the UK, without Archie who stayed in Canada, and promptly dropped a bombshell by announcing they wanted to step down as senior royals to earn their own money, while still supporting the Queen.

The Megxit crisis ended with the duke and duchess having to quit their roles as working royals completely.

In a speech explaining his reasoning at a Sentebale dinner, Harry told how he hoped for a more peaceful life for his family.

He also revealed how a thrilled Archie had experienced his first snowfall on Vancouver Island.

“It has also been a privilege to meet so many of you, and to feel your excitement for our son Archie, who saw snow for the first time the other day and thought it was bloody brilliant!” the duke said.

Harry and Meghan no longer use their HRH styles and are pursuing a life of financial freedom in the US, setting up home with Archie in Meghan’s home city of Los Angeles.

Archie joined in with a video call to his great-grandmother the Queen on her 94th birthday two weeks ago as she marked the occasion in lockdown.