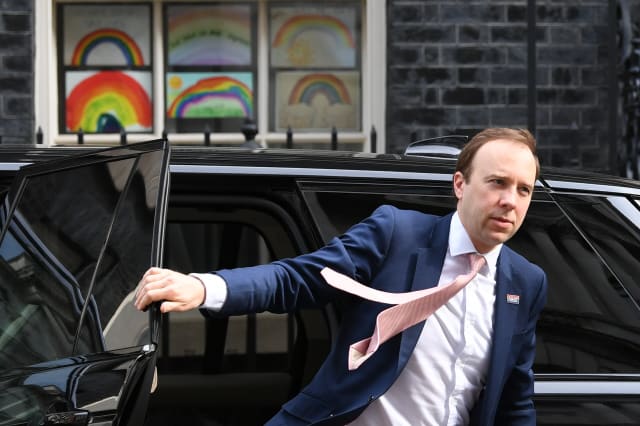 Ministers are urging the public to sign up to the app – which is beginning trials on the Isle of Wight -as a way out of the current lockdown and re-starting the economy.

But they have run into opposition from some Tory MPs and campaign groups concerned about the potential for the state to monitor individuals’ movements and contacts.

Mr Hancock however insisted it is “completely wrong” to say that the app represents a threat to civil liberties.

Instead, he said it is a “very, very positive step” which will enable people to regain some of the freedoms they had lost as a result of the lockdown.

The row erupted as the latest figures from the Office for National Statistics showed another rise in the weekly number of registered deaths involving Covid-19 occurring in care homes in England and Wales.

Over the same period the number of registered deaths involving coronavirus occurring in hospitals fell from 6,107 to 4,841 – a decrease of 21%.

Mr Hancock said the new NHS Covid-19 app is central to the Government’s “test, track and trace” strategy for controlling the spread of the disease while easing social distancing rules.

He said concerns about the app expressed by groups such as Amnesty International UK – which warned they are “opening the door to pervasive state surveillance” – are misplaced.

“The purposes of this are purely and simply to control the spread of the virus, which is really important,” he told BBC Breakfast.

“We’ve all had to give up significant infringements on our liberty – for instance, with the social distancing measures and the lockdown – and we want to release those, and this approach will help us to release them.”

The app uses Bluetooth to track and trace contacts between users – alerting people if someone they interacted with has displayed symptoms or tested positive for the virus.

Officials insist it is designed with privacy and security “front of mind”, with the data stored on an individual’s phone until the point they contact the NHS to report symptoms and request a test.

However, Amnesty International UK director Kate Allen said ministers need to explain why – unlike other European countries – Britain is establishing a central database to store information.

“We remain concerned that the Government is using the coronavirus pandemic to normalise technologies that threaten our privacy rights, and which the public would not accept in ordinary circumstances,” she said.

“Far greater justification and clarity is needed as to why the UK Government is going against the privacy-preserving models of other European governments.

“We understand the importance of easing lockdown restrictions but contact tracing apps remain a big experiment and there is limited evidence to suggest these apps even work in slowing the spread of Covid-19.”

Ministers have said that if the pilot on the Isle of Wight – beginning on Tuesday with NHS and council staff – is successful, the app could be rolled out across the country within weeks.

Mr Hancock said the more people who sign up to it, the more effective it will be.

“What I can tell you is that if you download the app then you are doing your duty and you are helping to save lives, and you’re helping to control the spread of the virus,” he said.

Labour leader Sir Keir Starmer said he hopes the trial succeeds but warned that the Government needs other contact tracing measures in place as well.

“I am a bit concerned that a similar app in Singapore only had, I think, something like a 20% take-up rate in the public,” he told BBC Radio 4’s Today programme.

“So, what I’m pushing the Government to say is you are going to have to have the traditional way of tracing as well, which is doing it more manually – phoning people, etc, etc.

“Because, if you put all your eggs in the basket of this particular app – which I want to work as much as anybody else – it may a) it may not work, or b) it may be that not enough people take it up.”