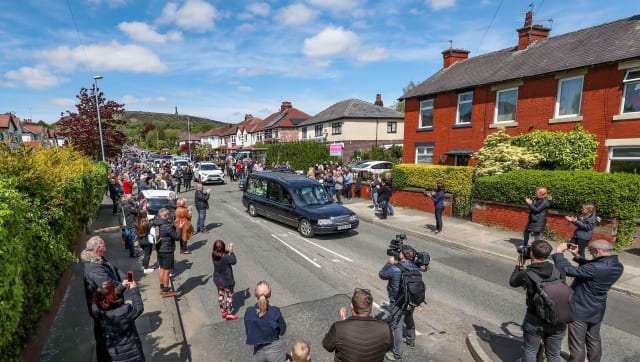 Hundreds of people lined the streets for the funeral of a much-loved family doctor who died with coronavirus.

Dr Saad Al-Dubbaisi, a GP in Bury, Greater Manchester, “gave everything for the community” looking after generations of the same families, before his death.

On Tuesday, the community showed their appreciation for the 59-year-old.

After a funeral ceremony at his local mosque, members of the public applauded as a hearse carrying his coffin approached the Garden City Medical Centre in Holcombe Brook, near Bury, where Dr Al-Dubbaisi worked.

Staff at the centre, many overcome by tears, stood in tribute as the hearse arrived at the medical centre, followed by cars carrying his family and then by a fleet of white ‘on-call’ doctor’s vehicles.

Fellow GPs, nurses and surgery staff took turns to lay dozens of floral tributes under a tree at the surgery which the hearse had parked beside. Inside the vehicle, Dr Al-Dubbaisi coffin was on display with a picture of the GP at its head.

After a few minutes’ reflection, the funeral cortege pulled away and more applause rang out.

Dr Al-Dubbaisi died on Sunday, May 3, having been “very poorly” for a number of weeks, according to his local NHS trust.

He had worked in the area for nearly 20 years and lived in Walshaw with his wife Monah and two daughters who are also doctors, according to the Bury Times, who spoke with his family.

His daughter Zainab said her father have been born in Iraq and had graduated from Baghdad Medical College in 1983 before later moving to the UK.

Dr Zahid Chauhan worked with Dr Al-Dubbaisi at Bardoc, an out-of-hours healthcare service for local communities, and described his friend and colleague as “a kind, humble gentlemen who was trying to make a difference”.

“He had an unforgettable personality for whoever he touched and came across,” Dr Chauhan told the PA news agency.

“I was just chatting to one of the directors who was there before me and they were telling me how he used to step in at the last minute when we really struggled and someone was off.

“He was really, really well-liked. On Sunday mornings he would bring cakes and things for the staff – a really nice gentleman.

“He was really humble, very kind and a GP who cared about the wider society … he gave everything for the community.”

Dr Jeff Schryer, a local GP and chairman of the NHS Bury clinical commissioning group (CCG), said: “Dr Al-Dubbaisi cared for generations of the same families from his practice in Holcombe Brook for many years, he will be sorely missed by his work family and patients.”