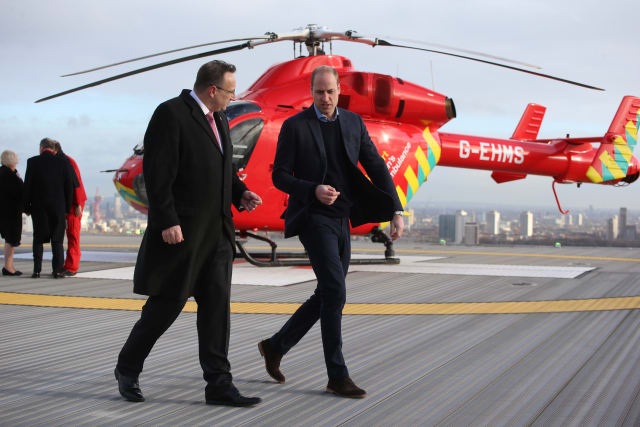 The Duke of Cambridge has come to the aid of air ambulance helicopters needing a convenient site to refuel by allowing them to land in Kensington Palace’s grounds.

Crews were having to fly to RAF Northolt in west London to refuel after Battersea Heliport closed due to the coronavirus outbreak.

But if the palace site – used by helicopters carrying members of the royal family – is closer they will be able to land at Perks Field, saving valuable time.

“During the pandemic, we have been faced with difficulties in refuelling in central London with the necessary closure of Battersea Heliport.

“Having a temporary option at the palace means that we reduce our refuelling time and ensure London’s life saving service is more available, delivering critical care to those who need it within minutes.”

In March, William became the patron of London’s Air Ambulance Charity – a service he understands well as he served as a helicopter pilot with the East Anglian Air Ambulance (EAAA), flying missions for two years before stepping down in July 2017 to focus on his royal duties.

Throughout his time, William was based at Cambridge Airport as part of a team including specialist doctors, critical care paramedics and pilots providing emergency medical services across Bedfordshire, Cambridgeshire, Norfolk and Suffolk.

Before flying with the EAAA, the duke served as a helicopter pilot with the RAF Search and Rescue Force based at RAF Valley on Anglesey.

London’s Air Ambulance Charity was established in 1989 following a growing consensus of opinion that victims of serious accidents were dying because of the delay in expert medical help reaching them, and the time it took to transport patients to hospital.

The service, which today costs £10 million a year to deliver, pioneered the doctor-on-board model for air ambulances and aims to bring the hospital emergency department to the scene of an incident.

Since being established its crews have treated more than 40,000 critically injured people and attended most major incidents in London including the 7/7 London bombings and the Grenfell Tower fire.