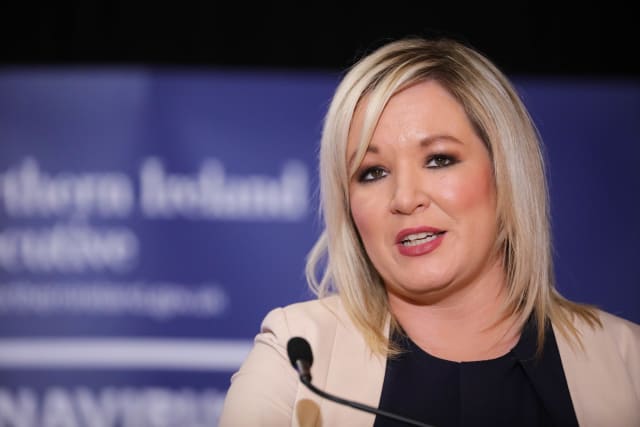 Michelle O’Neill said marking recovery phases on a calendar would lead to people focusing on certain dates and would result in disappointment if restrictions were not lifted on those days, due to scientific advice about the virus’s spread.

First Minister Arlene Foster said Northern Ireland’s plan had to be science-led, proportionate and designed to ensure the region avoided a second spike in cases.

The Irish government’s recovery blueprint sets out a five-stage process with linked timelines and provisional dates.

Starting on May 18, the Republic will move from one phase to another every three weeks, as long as health experts deem it safe to do so.

Stormont ministers continue to work on a plan north of the border.

Ireland’s health minister Simon Harris has said it makes scientific sense for the two recovery plans to be as closely aligned as possible.

At Monday’s Covid 19 briefing, Mrs Foster said the powersharing executive in Belfast did not receive advance sight of the Irish Republic’s plan before it was published on Friday evening.

The number of people who have died after testing positive for coronavirus in Northern Ireland rose to 387 on Monday, after another six deaths were reported.

There were another 69 confirmed cases of the disease, taking the total to 3,836.

Ms O’Neill said the Stormont plan could be published later this week, but warned it should not be viewed as a “green light” for people to return to normal.

Asked if businesses could expect projected dates for when they might be able to reopen – something the Irish plan includes – the deputy first minister said: “I think there are difficulties presented by putting down dates, the reason being people then work to that.

“And what if something happens, because we know that we have to monitor every action and see what that means in terms of the virus spread.

“So every action will have an impact in terms of virus spread, so we have to be able to do certain things, allow enough time in order for us to be able to assess the impact of that and then perhaps move on to do other things.

“So you perhaps can look at blocks of time, but I think that it’s difficult to go into calendar-led announcements, given that people then make their plans based on that and then they’ll be very disappointed if that’s not the case.

“So that’s one of the things that we’re actually discussing at the executive about what is the right approach.”

Mrs Foster said ministers from both jurisdictions met last week to discuss issues but confirmed the Stormont executive was not given advance sight of the Irish strategy.

“The (north/south) memorandum of understanding which is in place is in relation to sharing information in terms of the health piece,” she said.

“Of course it’s always for a government to put in place their own staging posts, way forward and that’s exactly what happened.

“We didn’t have a comprehensive view as to what was coming in relation to that plan on Friday evening.”

Mrs Foster said Northern Ireland’s plan would be guided by the requirement to keep the region’s R0 (the number of people an infected person infects in turn) below one and ensuring the pressures on the health care system remain manageable.

She said work was ongoing on drawing up the document.

“Whilst I appreciate many of you are anxious for us to produce the plan immediately, it is important that the executive remains focused on getting it right in the light of the latest medical and scientific advice,” she said.

The DUP leader cautioned that talk of a recovery plan could prompt people to start disregarding existing restrictions.

“We in the executive are very conscious that there’s a real danger of members of the public becoming distracted and assuming it’s OK to resume what they might have been doing before,” she said.

Mrs Foster was asked if she could give an indication on when schools might open again, given the Irish government has made clear the general school population will not return to class until September.

The First Minister said it was not possible to give a commitment as schools opening impacted so many other sectors of society, such as childcare, transport and the workplace.

“I can’t give you a straight answer today,” she said. “I’m being entirely open and honest with you around that because it is part of the whole plan that the executive is working on.”

Expert: Covid-19 may have been dormant around the world before emerging in China

UK could experience up to 35,000 excess cancer-related deaths due to Covid-19