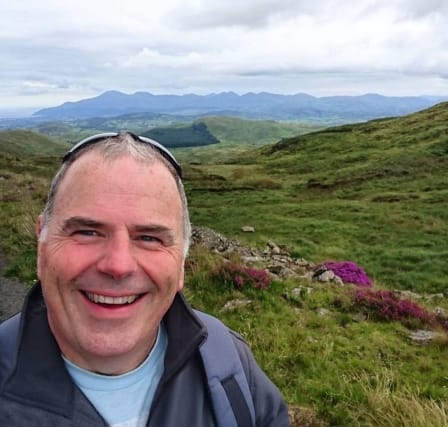 A retired GP has said he is looking forward to putting his feet up after walking part of the Camino de Santiago pilgrimage in his Co Antrim driveway.

Martin McMullan, who has incurable cancer, was unable to travel to to Spain to complete the world famous trek this year due to the coronavirus pandemic, and said a joke that he would walk it in his drive turned into a reality.

He completed the equivalent of the stage from Logrono to Burgos in northern Spain on Monday, his 58th birthday, after walking 15 miles a day for five days.

“I’ve a pain in my left leg I’ve never had before, and getting across the finish line and getting to sit down with a beer is going to be the best feeling ever,” he told the PA news agency.

“It’s not about me, it’s about the money raised for Trocaire. That is what spurred me on, that’s the whole purpose of it.

“I’ve walked 75 miles in the five days. I’m originally from Tyrone, so that’s from here (Lisburn) to the other side of Omagh. It’s a long walk but I did it over the five days so that’s good.

“I found it harder than I thought, possibly from walking on the tarmac. As you go up and down there’s nothing to keep you motivated, there’s not another village coming up, not another town, not a mountain top, it’s the same old, same old.”

Dr McMullan said he started with the comparatively modest aim of raising £500 for the charity which provides aid oversea, and ended up with more than £30,000 after his challenge attracted widespread attention.

“Trocaire is a charity that relies on Lenten contributions for the people of the Third World,” he said.

“I felt that they were going to get hit hard for contributions since Lent celebrations were all cancelled.”

“Just affording people the concept of social distancing and hygiene would be very difficult for them.

“Charities like Oxfam and Concern would be working with very basic measures so that was the genesis of it.”

He followed a virtual version of the Camino route using step-measuring technology and had breaks at mileages corresponding to real rest stops.

Dr McMullan is a veteran of several sections of the Camino and first walked it to raise money for a charity linked to his medical condition.

He was diagnosed with a blood cancer, myeloma, in 2012, when he was just past his 50th birthday.

It normally affects people much older than him and damages the bone marrow.

He is highly vulnerable during the pandemic and on the list to self-isolate from even his own family.

Dr McMullan is living in an annex from the house to shield him from the infection.

The fundraising page is justgiving.com/fundraising/martin-mcmullan