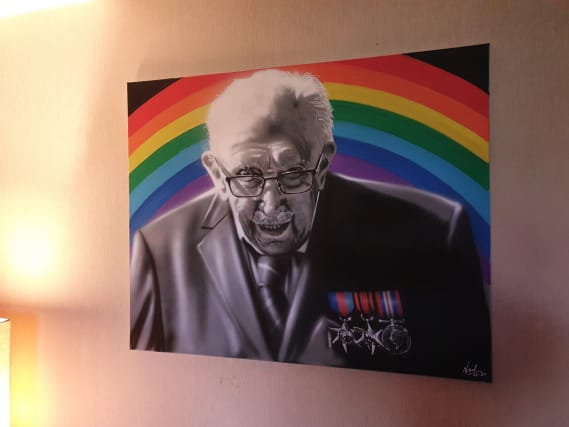 A portrait of Captain Tom Moore surrounded by a rainbow will be donated to the Army Foundation College.

Artist Neil J Arms, from Penrith, will be donating the painting, which was created in honour of the NHS fundraiser’s 100th birthday, to the college in Harrogate on May 19.

Announcing the donation on Facebook, Mr Arms said: “I’m extremely proud and honoured to reveal that my painting of Tom has a new home.

“As you may know, to celebrate his 100th birthday, HM The Queen promoted Captain Tom Moore to an honorary Colonel of Harrogate Military College. It’s this college where the painting is going!”

“The Commanding Officer of the college has requested to personally take delivery of the painting as he believes the piece deserves that level of respect,” Mr Arms said.

“I’m totally overwhelmed with pride as I write this.”

An NHS fundraiser started by Captain Tom reached over £30 million on Thursday as he celebrated his 100th birthday.

He was appointed as an honorary colonel on his birthday, while a Battle of Britain Memorial Flight flypast of a Spitfire and a Hurricane was organised by the RAF to mark his efforts.