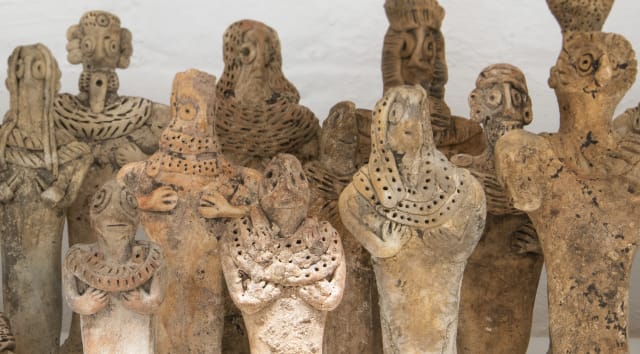 A raft of clay tablets covered in script, fired clay figurines, cylinder seals and animal-shaped pots appearing to be from the ancient Middle East have been identified as fakes by the British Museum.

Two trunks filled with items individually packaged in bubble wrap, including as many as 190 tablets, were seized by Border Force at Heathrow airport on July 1 2019 after they were sent from Bahrain to a private address in the UK.

Suspicions were raised by experts in the Department of the Middle East at the museum, who examined the photographs and objects, and said the tablets seemed to represent an almost complete range of basic items known from ancient Mesopotamia.

The raft of items included cushion-shaped school texts designed to be comfortably held in one hand and written on one side only, prisms and cylinders designed for burial as building inscriptions and administrative texts.

However, it was discovered many of the cuneiform inscriptions were a jumble of signs, some invented and others upside-down, which made no sense when read.

Experts also found the clay used was all of a similar type, which would be impossible for genuine articles, and they had all been fired consistently to a high temperature in a modern kiln, rather than dried in the sun as the authentic items would have been.

The sizes and thicknesses of the tablets also did not match those of the originals, which they said is a common error of a forger working from photographs in a book.

The fakes will now be used for teaching and training purposes while a selection will go on display for a short period at the British Museum when it reopens.

St John Simpson, curator at the British Museum, said: “These seizures confirm an emerging trend: capitalising on interest in the purchase of antiquities, unscrupulous traders are faking Middle Eastern objects for sale.

“These consignments confirm the importance of vigilance on the part of our law enforcement agencies and the role that museums need to play in the identification of these objects.”

Richard Nixon, senior Border Force officer at Heathrow, added: “Organised crime gangs are usually the drivers behind the counterfeit trade and, by making this seizure, our experienced officers have taken a substantial amount of money out of the hands of criminals.

“The links we have forged with experts at the British Museum were a vital part of this case and we will continue to work closely with them, as well as law enforcement partners, to stop counterfeit goods.”