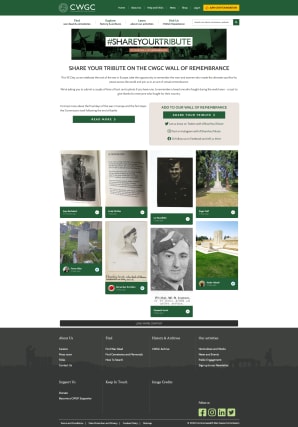 People are encouraged to pay virtual tribute to the Second World War generation ahead of VE Day by contributing to a digital “Wall of Remembrance”.

The coronavirus pandemic means this year’s commemorations for the 75th anniversary of victory in Europe day on May 8 have had to be cancelled or moved online.

To help families mark the occasion, the Commonwealth War Graves Commission (CWGC) is launching a digital campaign to collect photos, stories and memories of those who lived through the hardships of the war.

The public can submit their contribution by using the hashtag #ShareYourTribute on social media, or by uploading it to a special section on the CWGC’s website from Monday.

One person who will be sharing a tribute is Deborah Hamlyn, 49, from Sheffield, who plans to honour the memory of her late grandfather John Allen.

Mr Allen, from Bradford, who passed away in March at the age of 101, had a military career encompassing the Dunkirk evacuation, serving in India and the bloody Battle of Monte Cassino in Italy.

Ms Hamlyn, who herself served with the Royal Signals for six years, including in Northern Ireland, said she used to call her grandfather every day on the way to work.

“We used to have a bit of a giggle about things that we’ve both done, and we’d trade stories really. I could never beat his, though, to be truthful,” she said.

She described Mr Allen, who was a corporal by the end of the war, as a “really honest hard-working family man” with a “mischievous sense of humour”.

He initially joined the 13th infantry division anti-tank and served in France before returning to the UK in a small fishing boat from Dunkirk.

After being posted to the east coast of the UK, he was eventually sent to serve in the Indian army, later moving on to Baghdad, Kuwait, Lebanon and Egypt.

He was at the Battle of Monte Cassino before witnessing the end of the war in Trieste.

His stories included waking up unharmed surrounded by shrapnel in Italy, dive-bombing birds at the cookhouse in India, passing through empty French villages and witnessing a boat next to his blow up near Dunkirk.

“He said it all along that he was very, very lucky. He got away with not a scratch.”

She explained her grandfather did not talk about the “tragedies” he likely witnessed, preferring to focus on the “funny stories”.

Ms Hamlyn explained that later in life he was “very, very humble” and enjoyed playing games, and taught all his grandchildren to swim.

“He wouldn’t describe himself as a hero… he would have said people who didn’t get to come home would have been the heroes,” she added.

She praised the CWGC initiative as a “great” way to honour the wartime generation, with her family planning to share a photo and tribute.

They will be putting up bunting, raising a toast and holding a video call with relatives on May 8.

“It’s actually really important that we don’t forget, it’s a massive sacrifice from the previous generation,” she said.

Victoria Wallace, CWGC director general, said: “At this dark time, we want to give people a way to honour those brave men and women who gave their lives in the Second World War, creating this virtual Wall of Remembrance, so they can take part in VE Day.

“Whether it is a simple thank you, a picture or a few lines of text, we want to collect as many tributes as possible.

“Despite trying circumstances, we will ensure that these men and women are remembered in perpetuity.”

The CWGC maintains memorials and cemeteries around the world that commemorate the 1.7 million Commonwealth servicemen and women who died during the two world wars.

To add a tribute to the online Wall of Remembrance visit: cwgc.org/share-your-tribute.