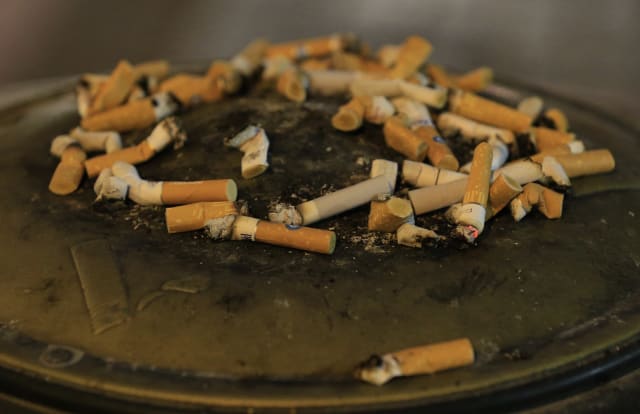 An elderly woman has successfully given up cigarettes after smoking up to 30 a day for more than 60 years.

Tag Doogan, who quit smoking in November to be healthier for her grandchildren, said she feels she has given herself the best chance if she ends up “facing the virus”.

Ms Doogan, who has two young grandsons, Eddie, 4, and Louis, 6, said: “Smoking is bad for the grandchildren, and I wanted to be a better, kinder person.

“I was miserable because I was wheezy and couldn’t walk a few steps without getting out of breath.

Ms Doogan, a retired pattern cutter, said her breathing problems peaked two years ago when she was left gasping for air after a gym session in an air-conditioned room.

“I was in hospital when I went to the gym a couple of years ago, because of the air conditioning – I could hardly breathe,” she said.

“The doctor said to me ‘you’re half dead’ and I was taken to an intensive care ward. Honestly it just didn’t seem real.”

Ms Doogan, who is originally from Cumbria but has lived in west London for six decades, said the day she quit was precisely three months before her 79th birthday.

“I thought once I might just buy a great big cigar – a Havana thing – and have a couple of puffs on occasions. But I’m never going to buy another packet of fags again.”

Ms Doogan said her lung capacity has improved by 130% since quitting, her blood pressure has dropped to a healthy level, and she has experienced “amazing” mental health benefits.

“I can face the virus because I’ve given up smoking – it’s got all the positives,” she said.

“I would feel so guilty if I was still smoking, and the fact that I might die because of not breathing and being very uncomfortable.”