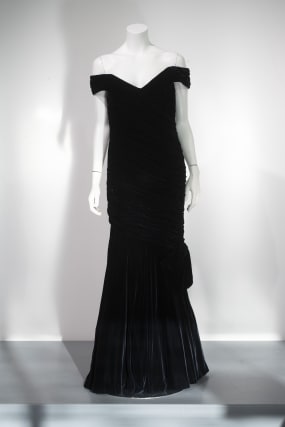 A dress famously worn by Diana, Princess of Wales, remains stuck in lockdown before it can be displayed to the public.

Diana wore the midnight-blue velvet gown by Victor Edelstein when she danced with Hollywood star John Travolta during a 1985 state banquet at the White House.

Purchased in December for £220,000 by Historic Royal Palaces, it was due to join the royal ceremonial dress collection at Hampton Court Palace.

The dress was being prepared for display when lockdown began, and remains in a workroom, described as an “isolation room”.

Newly acquired garments undergo freezing or heat treatment, to remove moths and their eggs, before joining the collection.

“The dress had been frozen and then we left it to thaw out for a few weeks to make sure we were not cracking any fibres or anything like that.

“We would then repack it for more permanent storage within the collection stores. But we hadn’t quite finished that process, so it’s still sitting in the isolation room.

“Without a doubt it will be on display again. It is a perfect marriage of form and function and was the perfect dress for that evening.”

Ms Lynn added: “It’s such a momentous acquisition. It’s the perfect blend of celebrity and royalty, so it’s really special that it’s now part of a designated national collection because we will preserve it for posterity.

“We exist to tell the story of our palaces and their people, and Diana is one of them. There is still such interest in Diana and the charity work that she did, so she is still hugely relevant.”