Kate coos over newborn baby during virtual chat with parents 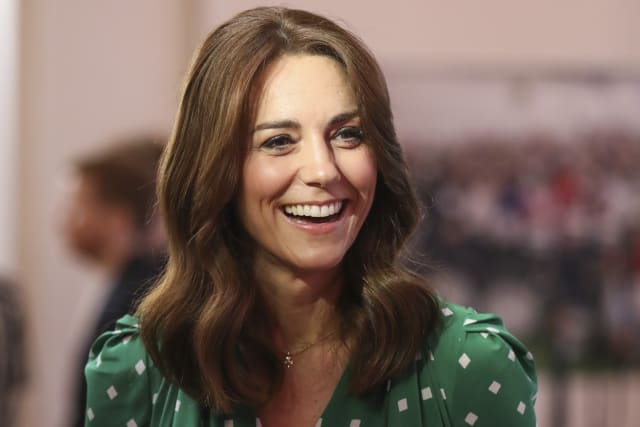 The Duchess of Cambridge has made a virtual bedside visit to new parents during a video call to midwives she worked alongside last year.

Kate chatted to Rebecca Attwood and John Gill with their baby Max nearby, and when she was told the infant had been born the night before, the royal said: “My goodness, you must be exhausted.”

Midwives told the duchess the coronavirus outbreak had left some mothers suffering from anxiety, concerned about catching Covid-19.

During another video call with experts from the sector, the duchess raised concerns about new parents, saying they should “reach out and ask for help” if they need it.

The video call was made on April 22 to staff at the maternity unit of Kingston Hospital in south-west London, where she spent two days on a work placement last November.

When the duchess, who is mother to six-year-old Prince George, Princess Charlotte, who celebrated her fifth birthday on Saturday, and two-year-old Prince Louis, began chatting with the parents of baby Max, she said: “Well firstly, huge congratulations. Is it a little boy or a little girl?”

“It’s a little boy,” Ms Attwood told her, as she sat up in her hospital bed with her newborn son alongside her in a cot.

Given a closer look at little Max, the duchess cooed: “He’s so sweet. Ah, congratulations. When did you have him?”

Told he had arrived at 10pm the previous night, Kate said: “My goodness, you must be exhausted,” and his mother replied “Yes. I’m pretty tired now.”

During her video chat, Kate spoke to midwives she had met before, and their colleagues, about how the experiences of expectant mothers and new parents has changed because of the coronavirus pandemic.

To maintain social distancing, three pairs of midwives took it in turns to join the chat, while another was filmed putting on personal protective equipment before taking the laptop in to introduce the duchess to baby Max and his parents.

From her Anmer Hall home in Norfolk, the duchess watched as the hospital birth centre’s lead midwife Sam Frewin, whom she had met during her work placement last November, appeared on camera in a mask and disposable apron.

“I know,” gasped Kate, surprised by her appearance.

Looking closer, she laughed, adding: “With your eyes, I can.”

Later Jennifer Tshibamba, an antenatal midwife who is part of a team offering ultrasound scans and blood tests for genetic conditions, said wearing masks was an added challenge when giving parents difficult news.

She said: “It’s the aspect of having that face-to-face contact and being at a distance and having your mask on and not seeing someone’s facial expressions and knowing that she might be hesitating to say something.”

During the video call, the duchess asked about the concerns of mothers and was told by Jo Doumouchtsi, a perinatal mental health midwife, there had been an increase in referrals for anxiety.

She said: “The main issues that women are having at the moment really are around coming into hospital and worries about catching Covid, but also about the isolation after the baby is born.

“They have to self-isolate, so they are having limited support from their other family members.”

The duchess, who has spent much of her public work highlighting the importance of the early years development of children and parental wellbeing, said to the group: “Parents do need to go out and reach out to those who can support them, particularly those who can provide knowledgeable resource as well.

“It’s important to access and reach out for help when you do need it.”

She added: “You speak to six mums and all of you realise you are going through the same thing. Before that, you’re worried that actually what you’re experiencing, you’re the only one who’s going through it.”