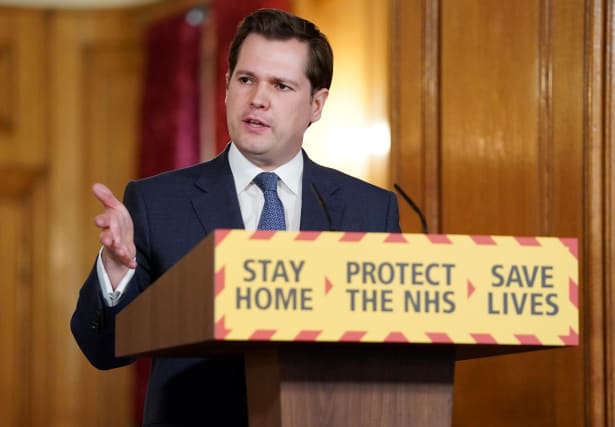 A raft of measures "to support the most vulnerable in society" including domestic violence victims and rough sleepers have been announced by the Housing Secretary.

Robert Jenrick announced a £76 million package for England to support more safe spaces and accommodation for survivors of domestic abuse and their children, to boost the recruitment of counsellors for victims of sexual violence, and to help charities offer helplines.

Addressing victims of domestic violence directly, Mr Jenrick said: "You are not alone, you do not have to stay at home, you can and should leave the home if you're in danger."

He added: "Our outstanding police will be there for you, they will help you."

Additionally, more than 5,400 rough sleepers known to councils have been offered safe accommodation in the past month, Mr Jenrick said, as he announced Dame Louise Casey will lead a new taskforce to tackle the issue.

The number of people who have died in hospitals, care homes and the wider community after testing positive for coronavirus in the UK as of 5pm on Friday rose to 28,131, up by 621.

The death toll has edged closer to that of Italy, which at 28,236 is the highest in Europe, according to data from Johns Hopkins University.

And the number of daily tests both concluded and sent out in the last 24 hours dropped to 105,937.

It comes as questions were raised over how tests are being counted after Health Secretary Matt Hancock said on Friday he had met his target for 100,000 Covid-19 tests per day.

Among the measures to support domestic violence victims, Mr Jenrick also said on Saturday they would get "priority need" status for access to local housing.

Mr Jenrick added: "As a father of three girls, I cannot even imagine women and young children being put in this situation.

"We must be alive to the reality of what is happening in all too many homes across the country.

"I want us to defend the rights of those women and those children wherever we can, and that is what we're going to do."

He said the Government's Domestic Abuse Bill, which had its second reading in Parliament last week, would create "the first ever legal definition of domestic abuse".

He said that through the Bill, the Government would "be ensuring that the victims of domestic violence get the priority need status that they need to access to local housing services much more easily".

Earlier, The Times reported that commuters could be asked to take their temperature before travelling, and those with an elevated reading – a symptom of Covid-19 – would be expected to stay at home.

A senior Government source confirmed the plans are being looked at, but stressed they are a "long way" from being policy.