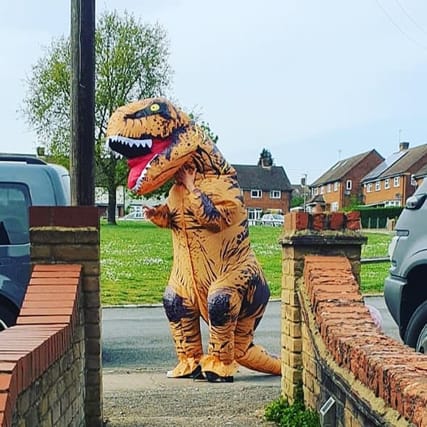 A giant inflatable dinosaur has been spotted “waddling” the streets of Watford by delighted neighbours isolating in their homes.

Georgina Cooper, a 35-year-old mum, has been using her daily walk to entertain her community as their friendly local Tyrannosaurus-Rex.

Mrs Cooper, who has two sons aged one and five, said she bought the dinosaur costume from eBay “for fun” but after its popularity “spiralled out of control” she began collecting money for PPE in care homes during the coronavirus crisis.

She said she lost her severely disabled cousin Miriam, who the family only want known by her first name, after care home workers unwittingly brought the virus into her accommodation and she died after testing positive.

Mrs Cooper is unsure whether care home workers who provided 24 hour care for her cousin were equipped with PPE, although she noted the care homes where she has delivered donations have had “varied” levels of PPE.

“We would never point fingers at the carers or anything like that, they do an amazing job looking after our relatives. It’s just unfortunate,” she said.

Mrs Cooper, now also known as Georgina the Woodside Dinosaur, has been using her daily walk to cheer up neighbours and collect donations to ensure carers are better protected from catching and spreading the virus.

“The dinosaur is filled with air so it’s got a little fan inside to keep it big,” she said.

“When it’s windy, it takes the head with it so you can’t see where you’re going and the head is flying around. You have to hold on to it.

“Also the legs are quite big so you can’t walk normally, I have to walk with my legs quite wide apart. It’s a little bit awkward.

“When I walk it has a big kind of waddle and the bottom sways and everyone laughs.

“They say the best bit is seeing it walk off because you can see it waddling down the road.”

“So many people come out on their doorstep, waiting and waving. It’s not just kids, it’s people of all ages who come out to see the dinosaur,” she said.

“There was one particular cul-de-sac that I went down which has lots of bungalows, and people were in wheelchairs and things like that outside their houses.

“It was so nice because they might not have seen anyone pass their house.

“It was really nice to have that sort of impact without even collecting any money for the PPE that I’ve been buying, just for people to be smiling and have something to brighten their day is really nice.”

Mrs Cooper collects donations on her travels, and via her fundraiser
(https://justgiving.com/crowdfunding/woodside-dinosaur)