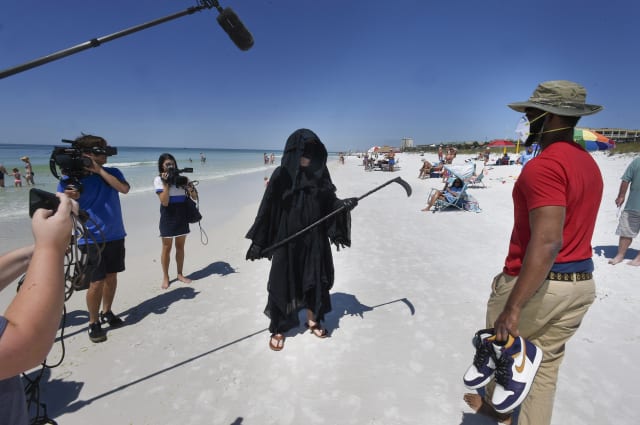 A US lawyer has gone viral after dressing as the grim reaper to protest against the reopening of beaches.

Daniel Uhlfelder made his protest in Walton County, Florida, his home state, because he feels local officials have been “premature” in their decision to allow people back on beaches which had been closed down in response to the coronavirus pandemic.

A clip of his local news appearance on 13 ABC had been viewed eight million times on Twitter by Saturday afternoon.

In it he is seen speaking to reporter Faith Graham, before hovering ominously in the background behind her.

“It’s premature that we open our beaches,” he said in the 13 News appearance.

“I think it’s going to prolong the recovery that we have and we should take better measures.”

He added: “It’s too soon and it’s not appropriate.”

On social media, many enjoyed the incongruous image of a man dressed as the grim reaper on a sunny Florida beach.

One Twitter user described it as “one of many quarantine moods” and another said: “I’m dying at how he just awkwardly stands behind her at the end waving his sickle around.”