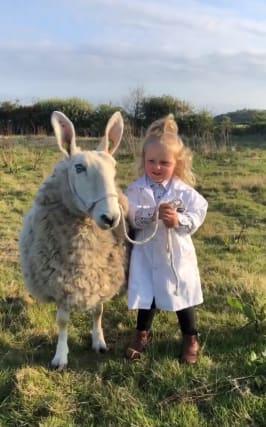 A three-year-old has impressed thousands with her sheep-handling ability after her skills went viral.

Barley lives on a farm in Norfolk with her mother Caitlin Jenkins and her father – and she was gifted her own flock of sheep on her first birthday so already has more than two years of experience.

And when a video of her sheep-handling entry to an online agricultural show was posted online, it did not take long for Barley to win the hearts of the public.

The Greatest Online Agricultural Show gives people the chance to show their livestock online after the coronavirus pandemic forced the cancellation of rural shows.

In Barley’s video, she can be seen alongside Ethel the sheep, taking her for a walk and commanding her to stand.

“As a family we have around 200 sheep on the farm, however the Border Leicester sheep belong to Barley,” Ms Jenkins told the PA news agency.

“Ethel is the oldest sheep in the flock, she’s very kind and has a good friendship with Barley.

“Barley loves nothing more than to be outside with us farming, she is very hands on and gets stuck in come rain or shine.”